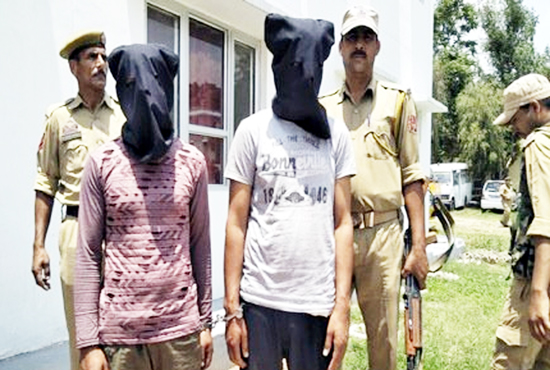 Excelsior Correspondent
JAMMU, June 11: Army, CRPF and Rajouri police today arrested two Kashmiri militants after a brief shoot-out at a naka at Thanna Mandi in Rajouri district and recovered an Insas rifle and ammunition from them, which they had stolen from police personnel deployed at police post of Baba Ghulam Shah Badshah shrine at Shahadra Sharif.
SSP Rajouri Yougal Manhas told the Excelsior that after stealing the weapon from the police post along with ammunition, the militants were heading towards Shopian on a motor-bike from Mughal road when a joint team of Rajouri police, 38 Rashtriya Rifles and 72 CRPF intercepted them at Rajouri-Dera Ki Gali road at Thanna Mandi Chowk when they were conducting random frisking of vehicles early this morning.
As it was still dark in the area, the militants tried to escape by accelerating speed of the motorcycle. The naka personnel chased the militants, who fired few shots at the joint party with a view to escape. However, security personnel acted swiftly and captured both the militants.
“The prompt and swift action by the jawans saved the naka personnel as the duo tried to take positions behind any object to target the security personnel but were overpowered,” sources said.

They identified the arrested militants as Mukhtar Ahmad, 22, son of Abdul Ahad Dar R/o New Colony Safanagri, Zainapora, Shopian and Aijaz Ahmad Parray, 22, son of Sanaullah Parray R/o Keshva, Chitragam, Shopian.
Police parties in the operation were led by Sub Divisional Police Officer (SDPO) Thanna Mandi, Iftikhar A Choudhary and SHO Thanna Mandi Nazir Ahmad Dar. They arrested both the militants, cordoned off entire area and launched fresh searches. However, no more arrests were made and it was established that both the militants had come from Shopian with a view to steal the weapons of police and return to South Kashmir, where they were in touch with Hizbul Mujahideen commander Zeenat-ul-Islam and had to join his outfit.
Both the militants were already involved in militancy related cases of Zainapora police station in Shopian district.
During preliminary questioning, the militants admitted that they had stolen an Insas rifle with three magazines and 49 live cartridges from police persons deployed at police post at Baba Ghulam Shah Badshah shrine at Shahadra Sharif in Rajouri district in the wee hours. The stolen gun and ammunition besides two empty fired cartridges were recovered from the possession of arrested militants.
“The militants disclosed that they stole the weapon and magazines from police barrack by taking away the box of a police official and then breaking the lock and stealing the weapon,” sources said, adding that all other angles involved in the theft of Insas rifle and ammunition were being investigated by Rajouri police.
A case FIR No. 97/2018 under Sections 307, 120-B RPC, 7/21 Indian Arms Act and 17/21/11/13 Unlawful Activities Act has been registered against both the militants at Thanna Mandi police station for further investigations.
SSP Rajouri Yougal Manhas and Additional SP Rajouri Mohammad Yousaf supervised the entire operation against the militants.