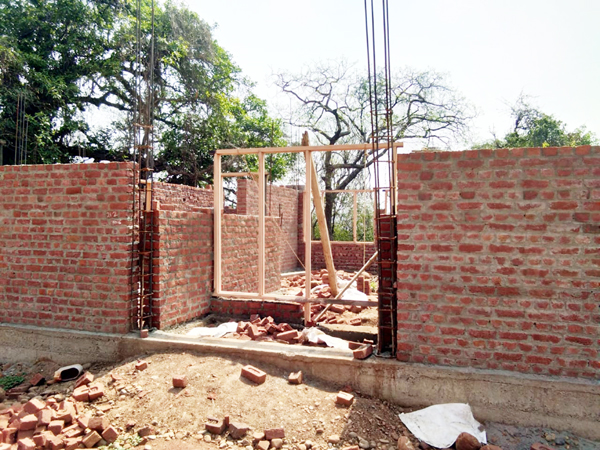 Nishikant Khajuria
JAMMU, June 11: Coming to the rescue of a  protected monument, District Administration Kathua today ordered immediate stoppage of the  illegal construction by the Department of Wildlife and Soil Conservation inside ancient Jasrota Fort in Kathua district.
Acting on the complaint lodged by the Department of Archeology and Museum, the District Administration Kathua  ordered that no construction shall be undertaken on the site of Jasrota Fort by the Wildlife and Soil Conservation Department, which was constructing a Pacca hut there.
Tehsildar Kathua will ensure implementation of the order in this regard and shall file compliance report in the matter, the order further says.
The action was taken after Deputy Director Archeology and Museum, Jammu, vide his communication number DD/216-17.2018/SPM-50, dated 09-06-2018, approached the Deputy Commissioner Kathua with the written complaint that the Department of Wildlife and Soil Conservation had started illegal construction work at Jasrota Fort, a State protected monument, in contravention  of the orders of the High Court.
Pertinent to mention that  the Education Department of the Government of Jammu and Kashmir, vide notification number THE/15th of December 1995, issued under SRO327 of 1995, dated 15-12-1995, Fort/Palace complex at Jasrota in tehsil and district Kathua, on an area of 696 Kanals of Forest/Revenue land comprising Khasra number 2013/1, 2923/1 and 2923/2, was declared as a State Protected monument.
Further, the High Court of J&K, in OWP number 171/2018 MP Number 01/2018, in case titled Narinder Singh and others versus J&K State and others, vide its order dated 02-02-2018, had said, “Learned counsel for the petitioners submits that Jasrota Fort/Palace Complex, situated at Jasrota, district Kathua, is a protected ancient monument. However, the respondents have started the construction activity within prohibited area. In view of the aforesaid submission and in fact of the case, it is directed that  the respondents shall not undertake any construction activity within 100 meters of the protected area of the ancient monument in question till next date of hearing.”
However, despite the clear cut directions of the court and in violation of the rules  for protected monuments, the Department of Wildlife and Soil Conservation went ahead with its project of constructing  a Pacca Hut inside the Fort complex.
Foundation stone of this hut structure was laid  by then Minister for Wildlife and Soil Conservation on February 4, 2018, two days after the High Court direction against any construction inside the Jasrota Fort.
Besides the Pacca hut, the Department of Wildlife and Soil  Conservation was also ‘renovating’ two ancient ponds and constructing a road inside the Fort complex.
Ironically, the construction activity  was still going on even after instructions to stop the same by the incumbent Minister for Wildlife and Soil Conservation, Rajiv Jasrotia.
As some hidden hand in the Department did not pay heed to the court direction and the Minister’s instruction, the District Administration Kathua, on the complaint of  the Department of Archeology and Museum, issued necessary order under sub-section 5 of Section 10 of the Ancient Monument Act 1977(1920 AD) and got the work stopped.