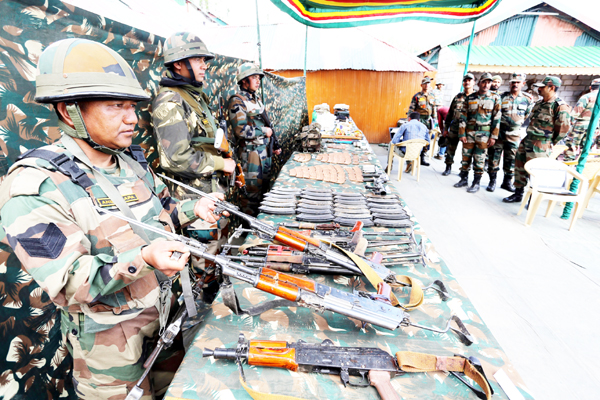 Excelsior Correspondent
SRINAGAR, June 11: Army today continued its operation against a group of heavily armed militants in Raynar forest area of Bandipora district.
The operation is going on for last three days and this morning there was a brief gun battle after which massive operations are on.
Army’s 14 RR cordoned off Raynar forest area following inputs about movement of a militant group three days ago. They were fired upon by the militants but they managed to escape.
Additional reinforcements of Army and SOG were rushed and a massive cordon was laid around the area.
This morning there was a brief gun battle and it  is believed that two of the militants of the group have been cornered in a nallah.

Sources said that the militant group comprising about 15 members recently crossed into Bandipora after infiltration from Kupwara.
In the meantime, Army said that the militant group eliminated near the Line of Control (LoC) in Keran sector was heavily armed and Army had information about possible infiltration attempt in the sector.  The group was from Jaish-e-Mohammad militant outfit.
Brigadier V S Chauhan of Keran based 268 Brigade told reporters that troops were vigilant as they are getting reports about presence of large numbers of militants waiting on the launch pads across the LoC.
“We had been getting credible inputs from number of sources about presence of a large number of Pakistani based terrorists at various launch pads opposite our sector and there were ploys for infiltration. Accordingly our troops were vigilant and alert”, he said.
Brigadier Chauhan said that Army not only managed to foil infiltration bid but prevented them from escaping to PoK. “On the intervening night of June 9 and 10, we observed a group of terrorists coming towards our defenses from the direction at LoC. Past midnight when they were closer to the LoC fence, they were challenged. The terrorists fired at our troops and tried to run back towards the LoC. However, high alert and brave troops led by the young and dynamic commanders on the ground immediately retaliated and brought down effective fire on the terrorists thereby preventing the escape”, he said.
The Army Commander said that the militants were highly trained. “The firefight continued till first light after which the intensity of the firefight increased. The terrorists were very well trained and armed with sophisticated weapons like AK-47, Under-barreled grenade launchers, grenades among others”, he said.
“Our soldiers displayed exemplary tactical acumen and leadership and were successful in eliminating all six terrorists who were part of this group without any casualties to our troops in a precise and surgical manner”, he said.
During the searches of the encounter site, army recovered six AK rifles, 26 AK magazines, 720 AK ammunition rounds, one UBGL, four hand grenades, 4 Motorola sets, 3 GPS, 2 Map sheets, six pouches, Rs 62000 Indian currency, two pistols, 2 pistol magazines, 2 wire cutters, six trousers, six pair of socks, six walking sticks, one ice axe, six medicine kits and one mobile.