Bharat Jodo Yatra suspended at Ramban, to be resumed from Qazigund on Jan 27 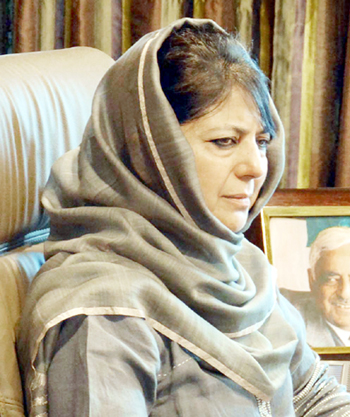 Fayaz Bukhari
SRINAGAR, June 11: Chief Minister Mehbooba Mufti today asked separatists to seize the golden opportunity and respond to Centre’s dialogue offer to resolve Jammu and Kashmir issue. She disclosed that efforts are being made to carry forward the political process but it depends upon the situation.
Speaking to reporters after inaugurating a bridge here, the Chief Minister said: “For ending the uncertainty and providing lasting peace in Jammu and Kashmir, everyone including the separatists should come forward and respond to the Home Minister’s offer of dialogue to resolve Jammu and Kashmir issue and other problems of the State.”

Mehbooba said the dialogue offer made by the Centre after initiating the Ramadan ceasefire hinted at initiation of a political process. “I feel that somewhere efforts are being made to carry forward the political process. How far can the political process be taken, that will depend on how good the situation remains on the ground here,” she said.
The Chief Minister said everyone believed that Jammu and Kashmir is a political issue which cannot be resolved militarily. “This is a golden opportunity … It does not happen very often that (such an offer comes from) a very powerful Prime Minister. It was 18 years ago that cessation of operations happened during the time of (the then Prime Minister) A B Vajpayee. At that time, talks were held at the level of Deputy PM (L K Advani) and the process seems to have been repeated again,” she said.
Mehbooba said it is the duty of all groups in the State to think about how to bring about peace and end the bloodshed. “It becomes a duty of all groups including separatists to think about how to end the bloodshed in Jammu and Kashmir which has undergone destruction in every sector for the last 30 years. Our education system has suffered, our development has suffered”, she added.
She hoped separatists will come forward. “We cannot force anyone but we definitely hope that they (separatists) will take advantage of this offer”, she added.
Asked about the possibility of the Centre extending the unilateral suspension of operations beyond Ramadan, Mehbooba said the Prime Minister and the Home Minister will review the situation and take a decision on it. “I am fully hopeful that the Prime Minister and the Home Minister after reviewing the situation will take an appropriate decision on it,” she said.
The Chief Minister said the common people have heaved a sigh of relief due to the suspension of operations during Ramadan. “The daily blood shedding has stopped and it has had a positive effect”, she added.
Mehbooba, however, lamented that continued violence by militants during the Ramadan month was not helping the situation in the State. “As you see grenade attacks are taking place, weapon snatching bids are happening and security forces and police personnel are being attacked. These kind of acts deteriorate the atmosphere,” she said.