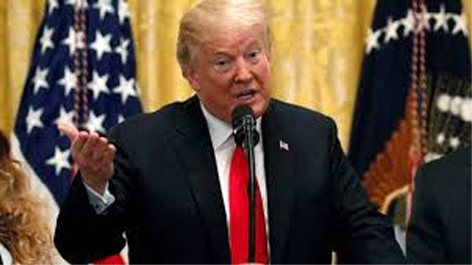 WASHINGTON, May 9: President Donald Trump says he’s in “no rush” to negotiate another financial rescue bill, even as the government reported that more than 20 million Americans lost their jobs last month due to economic upheaval caused by the coronavirus.
The president’s low-key approach came Friday as the Labor Department reported the highest unemployment rate since the Great Depression and as Democrats prepared to unveil what Senate Democratic leader Chuck Schumer calls a “Rooseveltian-style” aid package to shore up the economy and address the health crisis.
Some congressional conservatives, meanwhile, who set aside long-held opposition to deficits to pass more than USD 2 trillion in relief so far, have expressed reservations about another massive spending package.
“We’ve kind of paused as far as formal negotiations go,” Larry Kudlow, the director of the National Economic Council told reporters Friday. He said the administration wanted to let the last round of recovery funding kick in before committing to hundreds of billions or more in additional spending.
“Let’s have a look at what the latest round produces, give it a month or so to evaluate that.” Kudlow added that talks were in a “lull” and that administration officials and legislators would “regroup” in the next several weeks.
Still, White House aides are drawing up a wish-list for a future spending bill, including a payroll tax cut, liability protection for businesses that reopen and potentially billions in infrastructure spending.
Kudlow added that the White House was also considering allowing businesses to immediately expense the costs of modifiying their facilities to accommodate public safety measures necessary to reopen. The notion was brought up on a call with House members advising the White House on reopening plans Thursday evening and drew bipartisan support.
“We’re in no rush, we’re in no rush,” Trump told reporters Friday during an event with House Republicans. He called on Democratic-controlled House to return to Washington, adding, “We want to see what they have.”
The emerging Democratic bill is expected to include eye-popping sums, centered on nearly $1 trillion that states and cities are seeking to prevent mass layoffs as governments reel from the one-two punch of skyrocketing costs from the pandemic and dismal tax receipts in the shuttered economy.
The package being compiled by House Speaker Nancy Pelosi -– the fifth from Congress in a matter of weeks — draws on requests from governors for USD 500 billion, and from cities and counties for up to USD 300 billion to prevent widespread layoffs of police, fire and other frontline workers during the pandemic.
“No one could look at today’s jobs report, the highest unemployment since the Great Depression, and say we should hit the pause button on further government action,” Schumer said in a statement.
He compared Trump and his GOP allies in Congress to former President Herbert Hoover, who is often seen as failing to respond adequately to that crisis. “We need a big, bold approach now to support American workers and families,” Schumer said.
But the package has had little input from Republicans and is finding scant support, even as some in the party support certain provisions, including the local aid.
Pelosi acknowledged Trump hasn’t been a party to the negotiations, telling CSPAN Friday, “I don’t have any idea what the president does.” While Trump initially indicated he’d be amenable to helping state and local governments, he’s increasingly listening to conservative voices within his administration and on Capitol Hill arguing it would be an unwarranted “bailout” for ‘fiscally irresponsible’ jurisdictions.
Senate Majority Leader Mitch McConnell also said it’s time to press “pause” on more spending as Congress assesses the unprecedented outlays so far.
In particular, McConnell has led resistance to the state “bailouts,” even as his home-state of Kentucky is among those staring down budget red ink. Republicans argue the top priority in the next package should be approving liability protections to shield businesses that re-open from what he warns will be an “epidemic” of lawsuits.
Trump aides believe they have bought themselves some leverage on the state and local assistance matter with a rule change announced by the Treasury Department last week that allows states to use funding they received in early relief packages to assist first responders.
“States can use the money for policemen, firemen, first responders, without limits,” Treasury Secretary Steven Mnuchin told Fox Sunday.
He added, “But the president is very clear: We’re looking to help states, but we’re not bailing out states’ finances.” Despite Trump’s comments, White House press secretary Kayleigh McEnany said to reporters regarding the new phase of relief: “I think it’s important for us to move and look at a phase 4. The president thinks so, too, so those negotiations will happen.” (AGENCIES)