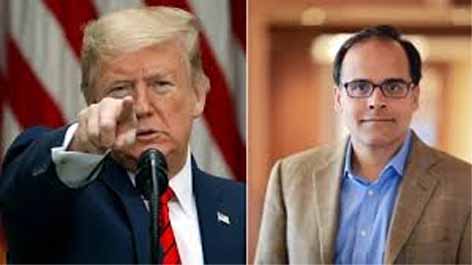 Washington, Jun 20: US President Donald Trump on Friday announced his intention to nominate Indian American Deven Parekh as a member of the Board of Directors of the International Development Finance Corporation.
The nomination of Parekh, who is the managing director at software investment firm Insight Partners will be for a period of three years.
Parekh previously served on the Overseas Private Investment Corporation board from 2016 to 2018 and was a member of the advisory board of the United States Export-Import Bank from 2010 to 2012.
A leading Indian American global venture capitalist, Parekh received his BS in Economics from the Wharton School at the University of Pennsylvania.
Last month, he co-hosted a virtual fund raiser for former vice president Joe Biden, who is the Democratic presidential nominee against Trump.
Parekh was a major fund raiser also for former President Barack Obama.
He held a number of positions at Berenson Minella & Company between 1992 and 2000, including those of principal and vice president. Previously, from 1991 to 1992, he was a financial analyst for the Blackstone Group.
As managing director at Insight Partners, Parekh manages investments in application software, data and consumer internet businesses globally. He has actively worked for investments in Europe, Israel, China, India, Latin America, and Russia. In India, among others, he has invested in BharatPe. (PTI)