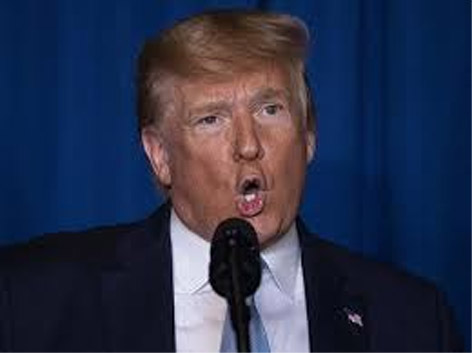 WASHINGTON, Jan 17: Donald Trump said Thursday he will nominate two allies for the board of the Federal Reserve, which the US president has repeatedly accused of not doing enough for the economy.
Trump had originally tweeted in July he would nominate Christopher Waller, a director of the Fed’s satellite office in St. Louis, Missouri, and conservative economist Judy Shelton.
The White House officially announced the nomination in a statement on Thursday, but the two candidates must first be confirmed by the Senate.
The last two candidates Trump tapped for the Fed board — conservative economic commentator Stephen Moore and former pizza executive Herman Cain — were so unusual that even several Senate Republicans said confirming them would be out of the question.
Both Waller and Shelton — who Trump noted both possess doctorates — are economists who share the president’s cutting opinion of the Fed.
Christopher Waller is a former economics professor at the University of Notre Dame and the director of research at the Federal Reserve Bank of St. Louis, who specializes in financial theory and macroeconomics.
Judy Shelton, a strident critic of the central bank, was the US executive director at the European Bank of Reconstruction and Development and has served on the board of Hilton Hotels.
She is an outspoken supporter of low interest rates — she has indicated she approved of lowering them to zero percent in one or two years — and like the president often uses Twitter to share her views.
Last April, she published an editorial in the Wall Street Journal criticizing the Fed’s 2008 approach to combating the economic recession.
She also expressed support for returning to the gold standard — where the currency is tied to a fixed quantity of gold — believing that such a system would guarantee stability for exchange rates and would prevent the US’ commercial partners from currency manipulation.
However, a return to the gold standard is viewed as unrealistic and outdated by the majority of economists — it was abandoned in 1971 by President Richard Nixon.
Trump routinely lambasts the central bank and its president Jerome Powell for raising interest rates, claiming it is holding back US economic growth, which he views as key to his reelection in November.
His attacks have become less frequent and biting recently.
The Fed lowered interest rates three times in 2019, although Powell has maintained the independence of the central bank. (AGENCIES)