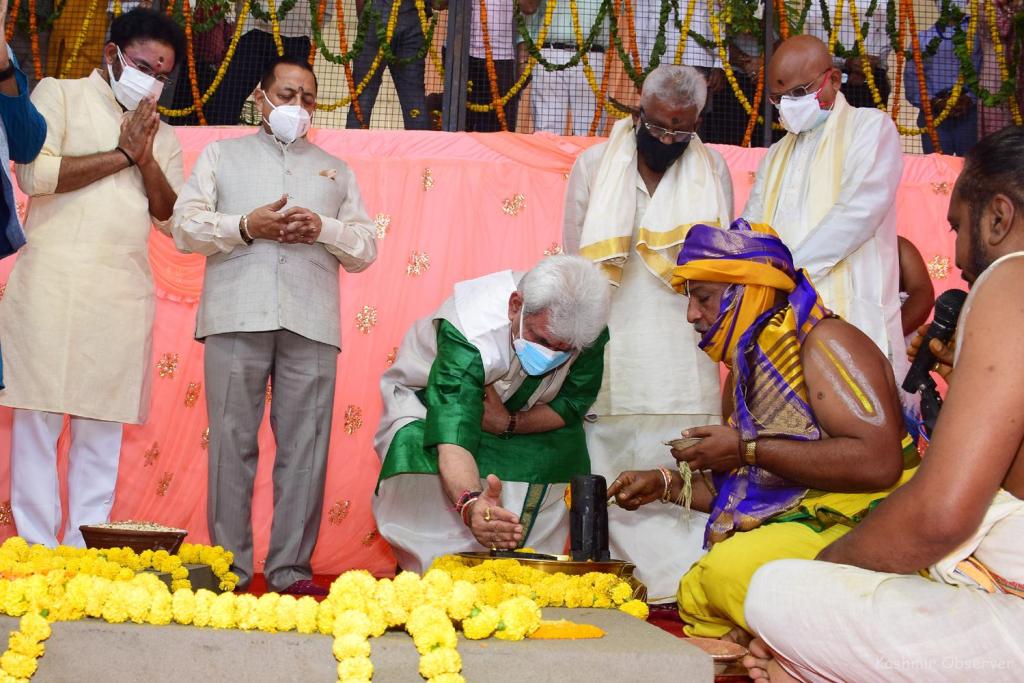 B L Saraf
Lt Governor Manoj Sinha, while speaking on the occasion of ‘Bhoomi Pujan ” of Shri Venkateswara Swamy Temple to be constructed by Tirumal Tirupathi Devasthnanam in Jammu, flagged salient features of the project which, when completed, will have a far reaching impact on overall economic and cultural development of Jammu region . He said that once the Temple complex comes up -particularly the Vedic Patshala part – the Indian culture will find a strong foundation here. In the month of April the Administrative Council allotted 496 kanals of land to the Tirumal Tirupathi Devasthanams (TTD) for ” building of Temple and its allied infrastructures, pilgrim amenities complex, Vedpatahshala and Spiritual / Meditation Centers.” The Administrative Council, while approving the proposal, said that the move was aimed at exploiting to the full the tourism potential of Jammu , besides enhancing economic opportunities .
The TTD board has been established under TTD Act ,1932 and is presently governed by Chapter 1V of Andhra Pradesh Charitable and Hindu Religious Endowments Act 1987. It is a charitable organization with proven record of activities in spiritual,cultural, social and educational spheres.
The auspicious occasion has, indeed , gladdened hearts of Kashmiri Pandits (KPs). Because, they see a ray of hope that their spiritual and civilizational sign posts in the Valley may be reclaimed from the brink. With their expulsion from the Valley Pandits’ “cultural foundation” back home stands so violently shaken by the elements that it may cave in anytime. The Temples and Shrines of Hindus in Kashmir are, on Government’s own admission, in a bad shape and their valuable assets have been misappropriated. In this situation the spirit in LG’s point that Shri Venkateswara Temple will strengthen Indian Culture in Jammu needs to be carried further to the Valley, where not only the ” Cultural Foundation “of India has shaken but also the local culture is in ruins. Therefore, it is not for nothing that Kashmiri Hindus, in one voice, have been demanding a proper statutory cover for protection, democratic and transparent management and preservation of Temples and Shrines. So that ” foundation of local Culture ” is strengthened and saved from a decay. That in turn will ensure preservation of Indian culture in the Valley.
In Jammu , the same day other event of some significance for the Kashmiri Hindus came to be noticed. On the initiative of some well wishers of the community the MOS in the PMO, Dr Jitendra Singh unveiled first edition of specially designed LED glow of Mata Kheer Bhawani Pratima. Speaking on the occasion the MOS said that this work will reiterate and transmit religious-cultural heritage to the next generation of KPs living far and wide in the globe. He impressed up on the organizers to prepare a soft copy of the Pratima and circulate it among the new generation so that that the young ones remain connected to the roots. Good suggestion, indeed.
Jitendra Singh has been a well wisher of the displaced KPs. He stood by them in trying times. They appreciate it and are in affectionate deference to the Doctor Saheb, well before 2014 and continue to hold him in esteem thereafter also. It must be said to the credit of MOS that he, more than KPs themselves, is in know of the bad state of health of these religious places in Kashmir. In terms of physical structure and spiritual grandeur, very little is left of them to be transmitted to the gen-next. Only a tale of devastation, loot and plunder remains to be told. State Government has admitted it in no uncertain terms but failed to stem the rot. The community is sanguine that Doctor Saheb, being in a position of authority, will recall the sorry state of these cultural land marks and ensure that an appropriate legislation is put in place, soon.
Admittedly, the religious places managed under a Statutory architecture are well kept, have attracted large number of devotees and huge offerings which have immensely contributed to the welfare of populace, besides catering to the spiritual appetite of the devotees. Their management is transparent and accountable. TTD Trust is one shining example of it and Shri Mata Vaishnov Devi Shrine Board (SMVDSB), in Jammu, is the other.
We wish same could be said of the management of Temples and Shrines run privately -some as family assets – many face charges of mismanagement. On occasions the Apex Court had to intervene to stem the rot. The Court , while hearing management and other related matters of Lord Jagannath Temple Puri – in Orissa, some years back, issued directions to ensure protection of “the sanctity and ethos” of this highly revered religious place . The directions issued have far-reaching consequences and apply, uniformly, to all religious places in the country.
We hope the LG would take cognizance of the issues raised by the Apex Court as they relate to the management of religious places in J&K, as well and in the light of his statement made at the time of ‘ Bhoomi Puja” of Devasthanam, may take appropriate steps to ” protect sanctity and ethos ” of these places of culture and spirituality by means of a statute. Apex Court has given expression to what millions of people feel on the issue in Kashmir. The Court must be heard carefully when it says that proper management of pilgrimage centers of great importance is a matter of public interest . These centers are of undoubted by religious , social historical and architectural importance, representing cultural heritage of our country .
Hindus in Kashmir visualize role for the prospective Statutory Board akin to SMVDSB and act as community institution and prove itself as latter has holistically done in the field of public service. For that to happen a law on the lines of SMVDSB is required .
(The author is former Principal District & Sessions Judge) 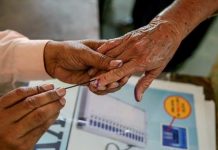 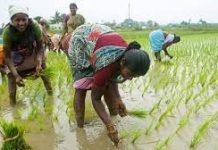 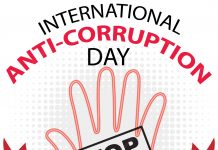