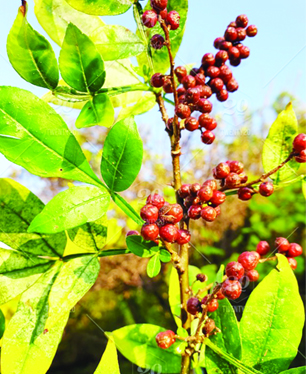 Zanthoxylum armatum DC. commonly called as “Timbru” is the most exploited one, deciduous xerophytic / spiny shrub growing to 3.5 metres in height, endemic from Pakistan across to Southeast Asia and up to Korea and Japan. It is one of the sources of the spice sichuan pepper, used in essential oil production called watara oil and as an ornamental garden plant. In India, it has been reported from warmer valleys and foot hills of the Himalaya of Jammu and Kashmir called Kandi belt, in the Eastern Ghats in Orissa and Andhra Pradesh and the lesser Himalayan regions in the North Eastern part of India including Khasi hills, Meghalaya, Mizoram and Manipur. The name Zanthoxylum comes from the word Xanthoxylum which is derived from the Greek word ‘xanthon xylon’ which means ‘yellow wood’. It is known by many names such as ‘Tejbal’ in Hindi, ‘Tumpunal’ in Tamil, ‘Toothache tree’ or ‘Indian Prickly Ash’ in English, ‘Gira’ in Bengali and ‘Andkaka Dhiva’ or Tumburi in Sanskrit. In Jammu region, it is commonly referred to as ‘Timbru’ (in Dogri) and ‘Timber’ (in Pahari).
Timbru is known as an important magical plant as whole plant including stem, bark, fruits and seeds possess medicinal properties and has been used as a medicine in both traditional and Ayurvedic treatments for ages. The different parts of the plant such as leaves, fruits, stem, bark, seeds have been used in several indigenous medicinal practices as carminative, antipyretic, appetizer, stomach ache, toothache, dyspepsia. A wide array of chemical compounds including alkaloids, flavonoids, lignins, coumarins, phenols, terpenoids have been found in this plant. These compounds are responsible for various biological activities like antioxidative, antimicrobial, antiviral, hepato-protective, insecticidal/larvicidal etc. The seeds were found to contain cis-9-hexadecenoic, eicosenoic,palmitic acids and tambuletin. Bark contains alkaloids like berberine, g-fagarine, b-fagarine, magnoflorine, laurifoline, nitidine, chelerythrine, tambetarine and candicine, resins, tannins and volatile oil. Carpels of the fruit give an essential oil which is isomeric with turpentine and has odour and properties like eucalyptus oil. An essential oil collected from the plants grown in Jammu and Kashmir contain linalool, linalyl acetate, citral, geraniol, methyl cinnamate and limonene. Extracts of leaves, fruits and bark of Zanthoxylum armatum were evaluated for their antimicrobial potential against various bacteria. Z. armatum seed oil, vanillin and fruit oil of Z. piperitum, in combination were able to enhance repellent activity against female Aedes aegypti. Smoke of timbru is very beneficial for treating chronic asthma.
Traditional appetizer, “Timbru chutney” widely relished in the household of Northern India is prepared from fresh or dried fruits of timbru. Besides, pickles made from the fruits aids in relieving cold, cough, headache, tonsillitis, limbs numbness and dizziness. The intake of timbru is known to benefit people suffering from rheumatism. Teeth cleaning sticks (datun) as well as walking sticks are made out of its branches. Their barks also utilized as traditional dye resource. Due to their disinfectant and antiseptic properties, the fruits are used to cure toothache, skin diseases and snake bites. In addition, timbru exhibits good antibacterial and antifungal properties. Bacterial infections of the mouth, digestive system and urinary tract are successfully treated with timbru fruits. Lupeol, a monoterpene found in timbru extracts, act as therapeutic and chemopreventive agent for the treatment of inflammation and cancer.