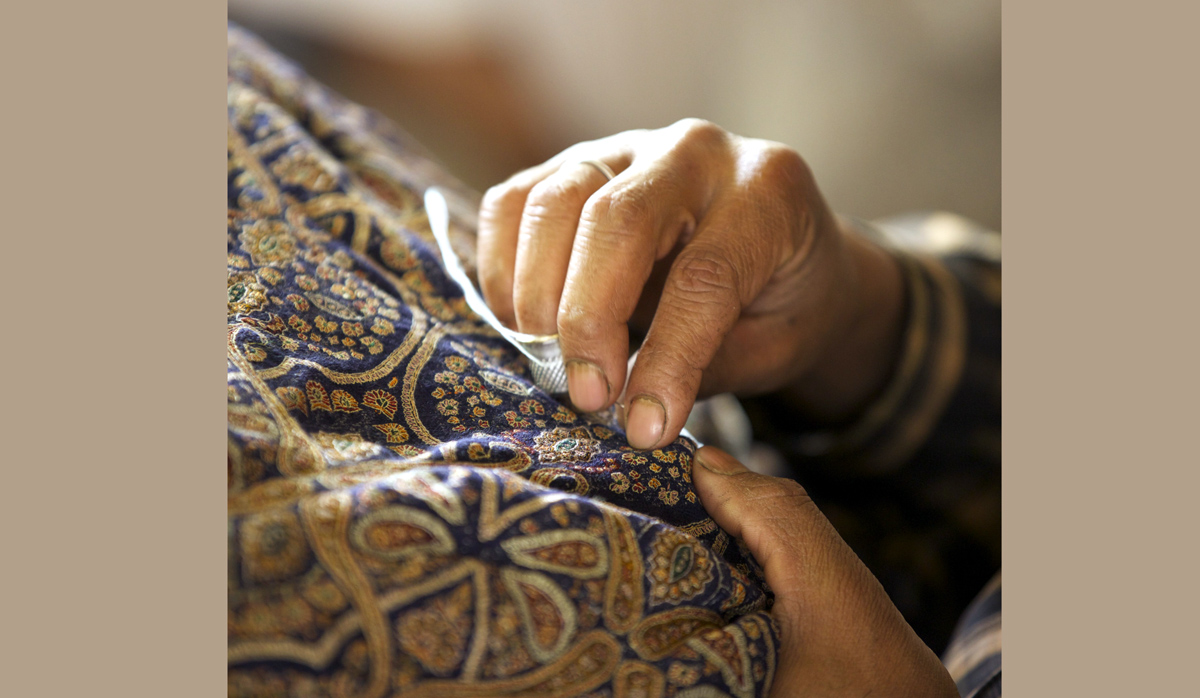 Padma Dolker
Pashmina is a soft, fine and warm fibre and comes from an extremely high altitude region called Changthang in Ladakh. The place has a harsh climate. The people have adapted themselves to this place. Changthang has a beautiful landscape and natural beauty. The local people in Changthang have adapted themselves to move from one place to another like the Changpa tribe.
The Changpa people graze sheepwhich are the main source of raw Pashmina. The Pashmina is combed off the sheep in the spring season. During winters the temperature drops to – 40 degree Celsius and hence the wool is allowed to grow on the sheep to protect it from the cold. Before summer the local people comb the wool off the sheepwith the help of a local comb specially designed for Pashmina wool known as Tat.
This combing helps the sheep feel cool in summer. After the wool is cut it is sold to entrepreneurs coming from Srinagar and the All Changthang Pashmina Grower Co-operative Marketing Society (ACPGCMS). The Ladakh Autonomous Hill Development Council (LAHDC) in Leh has founded the ACPGCMS. A former member of ACPGCMS says, “This is an initiative by LAHDC to help raise the income of the Changpa tribe through the sale of Pashmina. Earlier entrepreneurs from outside would come and buy the Pashmina at lower prices.” The society also helps the people of Changthang when they require money in Winter and the people pay back through Pashmina wool in Summer.
After the Pashmina is taken from the Changthang people it is made to go through the process of scouring and then exported to places such as Delhi and Srinagar. The Pashmina is also sold to local people who have shops and make products such as socks, gloves and shawls. But most of the raw Pashmina is exported to Srinagar where they use it to make full products such as Cashmere Shawls and Stoles which are then sold in Leh. Due to few facilities and industries in Leh, Pashmina is extremely important for family businesses in Srinagar.
A shopkeeper from Srinagar who has his shop in Leh says, “I have owned this shop since 1982 and my main source of income is from selling Pashmina products. The rawPashmina material is taken from the Changthang tribe and the process of spinning, weaving and knitting is done in Kashmir. Mostly, tourists are interested in buyingPashmina products.” On the other hand another shopkeeper from Srinagar who also sells Pashmina products says, “Pashmina is the finest and warmest wool. It is the king of all wools. People in Srinagar working in Pashmina mills are all above 50 years as the new generation are not interested in this work because they are not satisfied with the profits that are earned”. Earlier, due to lack of facilities in Leh all the raw materials used to be exported outside and the products would come in as Kashmiri products or with some other brand. The former Deputy Commissioner (DC) of Leh initiated a project known as’Looms of Ladakh’to help produce products from Pashmina in Ladakh itself. Ishey Dolma, an employee of ‘Looms of Ladakh’ says, “Wehave 7 groups of women from different villages in Ladakh who workon the makingof Pashmina products. We are given training for three months, where they teach us to make shawls, socks, gloves and hats. We hope to raise our income through this.” Illiterate women are mostly a part of this business because the new generations are busy with books and electrical gadgets. Learning the technique to make handmade products gives creativity; creativity leads to thinking;thinking provides knowledge and knowledge makes an individual great.
Those who wear branded Pashmina products don’t even know or realize that the people who make the product that they are wearing put their heart and soul into making it and therefore they need to popularize Pashmina products.In this hard work the Changpa tribe comes first and then the Kashmiri’s who help make the final product. Shepherds of the Changpa tribe take the herds in the morning and roam the area far and wide, while whistling and singing, in search of good pastures and water. In the evening before the sunsets the shepherds bring the herd back home.The herd is also fed food and put to sleep in a shed locally known as laka. The entire family is involved in taking care of the sheep and the herd. This ultimately helps in preparing the Pashmina, which is seen by outsiders only in the products that are finally produced.
(Charkha Features)