JAMMU, Oct 3: Director General of Police (DGP) J&K Dilbag Singh today visited Kishtwar, Doda and Ramban district where he held review meetings to take stock of the preparedness for the Urban Local Bodies (ULB) and Panchayat elections with officers and also interacted with police personnel.
While addressing the officers and jawans, DGP impressed upon the officers to dispose of the cases on fast track basis and keep crime index check and also enhance public relations.
DGP stated further that because of the safe and secure environment of region, projects are being executed and development is taking place in the region for which credit goes to Police, Army, BSF and CRPF who have worked as a team and accomplished the mission of establishing the peace.
Referring to welfare measures, he said that PHQ is looking into various demands and more announcements are expected from State Government for the benefit of police personnel. He directed all subordinate officers to complete the formalities for promotions in shortest possible time. He advised the police personnel to take care of health, hygiene and their families. DGP assured that all the grievances brought into his notice will be addressed.
While paying tributes to the martyrs, DGP said that J&K Police has earned a good name at National level due to their sacrifices for the Nation.
During his review meetings with the officers of civil administration, police and CRPF, the DGP directed the officers to act tough against white collar criminals by identifying and booking them under relevant laws. He said that over the years the number of personnel has increased and security grid has been strengthened and we have succeeded in our mission of eradication of militancy from the range.
Earlier, the SSPs of the concerned districts gave resume of the functioning of their respective districts.
At Ramban the review meeting was attended by the Brigadier Rajeev Chawla, Commander 11 Sector RR, Rafiq-Ul-Hassan, DIG DKR Range, Showkat Aijaz, DC Ramban, Shakti Pathak, SSP NHW Traffic Ramban, Anita Sharma, SSP Ramban and AK Mahajan, Commandant IRP.
At Doda, the meeting was attended by Simranjeet Singh DC Doda, Shabir Malik SSP Doda, Colonel Abhishek Rawat, CO 10 RR, Colonel Manish Sinha, Deputy Commander 4 Sector, Major Abishek Second-in-Command 4 RR, Additional SPs, CRPF officers and other police officers.
At Kishtwar, the review meeting was attended by Angrez Singh Rana DC Kishtwar, Rajinder Gupta SSP Kishtwar, Major Ankit Bakshi of 26 RR, Additional SP, CRPF, army officers and other police officers. The DGP also inaugurated the website of the District Police Kishtwar.
The officers of Army, CRPF and jurisdictional officers gave their inputs regarding various issues in these meetings. 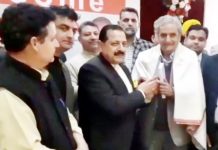