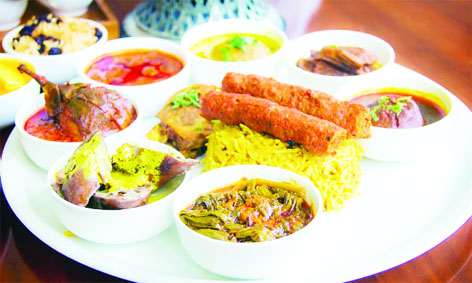 Diksha Chowdhary
Kashmir, “Paradise on Earth” is not only celebrated for it’s beauty, but for its exotic delicacies as well. The kashmiri food emanated from the Kashmir valley, the crown of India. Kashmiri cuisine embodies a divine balance of vegetarian and non- vegetarian items.
Traditionally, rice is the staple food of kashmiris and is clasically served with different varieties of meat. Saffron is truly the king in almost all the items (specially in Pulao, Kheer and Kahwah). Fennel powder is the most significant spice in kashmiri cuisine. The scent of fennel powder takes the dishes onto an another level. Desi ghee (Clarified butter) is also used munificently which makes the food extremely rich. There are two varieties of tea as well – Sheer chai and Kahwah chai. The speciality of Sheer chai is that it has a beautiful pinkish colour, while kahwah is good for cold and cough. These are typically served with different kashmiri breads- Bakarkhani, Katlam, Girda, Kulcha etc. These breads are golden brown in colour with seasame and poppy seeds on the top. Kashmiri food is known for it’s unequaled intermix of flavours. The profuseness of red chilly, turmeric and yogurt is something that gives it a distinct personality. Kashmiri dishes don’t comprises of onions, tomatoes, ginger and garlic. Dry fruits are also used in affluent quantities to prepare several curries. One can definitely not control his/her hunger after seeing spellbinding colours of the kashmiri food. There is a plethora of famous kashmiri items, and the list wouldn’t stop. Let’s jump into an exquisite journey!
Rogan Josh- Rogan means ‘red colour’ and Josh means ‘heat’. Rogan Josh collectively means cooked in oil with intense heat. It is one of the signature dishes of the kashmiri cuisine. It is made with red meat, traditionally lamb or goat. It is deep red in colour and was brought by Mughals. It is generally seasoned with cardamom, cinnamon, cloves, bay leaves along with yogurt. Use of onions is optional, although they are not usually included. Sugar and curd are also added. The tremendous mix of flavours gives it an aroma, no one can forget. Have it with Naan or steamed rice, it tastes delicious either ways.
Mutton Yakhni- It is made using mutton, yogurt, black and green cardamoms, cloves, bay leaves and cinnamon. The gravy has a creamy base. It doesn’t consists of red chilly or turmeric powder. The white gravy is the main differentiator from other preprations of meat due to the fennel powder. It tastes best with steamed rice.
Mutsch- It is made with minced meat of goat or lamb. It is then made into balls, preferably round or oval in shape. Turmeric is incorporated in a minimal amount. Almonds, apricot and raisins are included while making the balls as well. It not only intensifies the taste, but also the fragrance. The more spicy it is, the more it tastes.
Mutton Kaliya- It is a delicacy that is prepared mostly on all the kashmiri occasions. It is made up of rib meat of goat/lamb. All the flavours are included, excluding red chilly powder. The beautiful yellow colour of the dish makes it a perfect treat for all. In the end black jeera is sprinkled over it to beautify the dish.
Kabargah- It is a preparation that is made with zero gravy and is deep fried. It has an appealing brown colour to it. It is mainly used as a side dish. Kabargah is made up with milk. The spices used in this dish are nominal. This dish should be eaten steaming hot.
Dum Olav- Kashmiris love Dum Aalus. It is a luscious potato dish. The potatoes are firstly boiled, and tiny holes are made into it. These tiny holes are made so as to absorb the beauty of blended flavours. These are firstly deep fried and then laced into the gravy. To balance out the spices, sometimes curd is also added. It helps in improving the texture as well.
Chaman kaliya/Red chaman- Two varieties of paneer is popular in kashmiri cuisine. For vegetarians, this dish is something that stands out. It is cottage cheese made with aromatic spices. Onions or tomatoes are not used while making it. Milk is used while making Chaman kaliya. Indeed, milk is the king of Chaman Kaliya. Red chaman is made in spicy red gravy.
Monj Hakh- Kashmiris love their greens as much as they love meat. This dish requires a handful of ingredients and can be prepared in a jiffy. It doesn’t requires any turmeric or red chilly powder. All you need is asafoetida and dried red chillies. No other spices are required to give it an authentic taste. This dish is cherished by all, be it a kid or an oldie. Green colour of the dish is enough to develop your cravings easily. It is generally served with steamed rice and plain yogurt.
Khatte Baingan- These are firstly deep fried until a beautiful brown colour covers it. It is then put into a sourish spicy curry made up of red chilly powder, turmeric powder, fennel powder and tamarind juice. In the end, it is generally decorated with Bay leaf.
Nadru Yakhni- Nadru is nothing but lotus stem. It is a traditional dish of kashmiri community. This dish is prepared in curd, and thus gives it a creamy texture. Nadrus are cooked with mild aromatic spices. The curry is made without the use of any onions or garlic. This dish is simple, yet never fails to entice the taste buds. It is preferred with plain steamed rice and jeera rice as well.