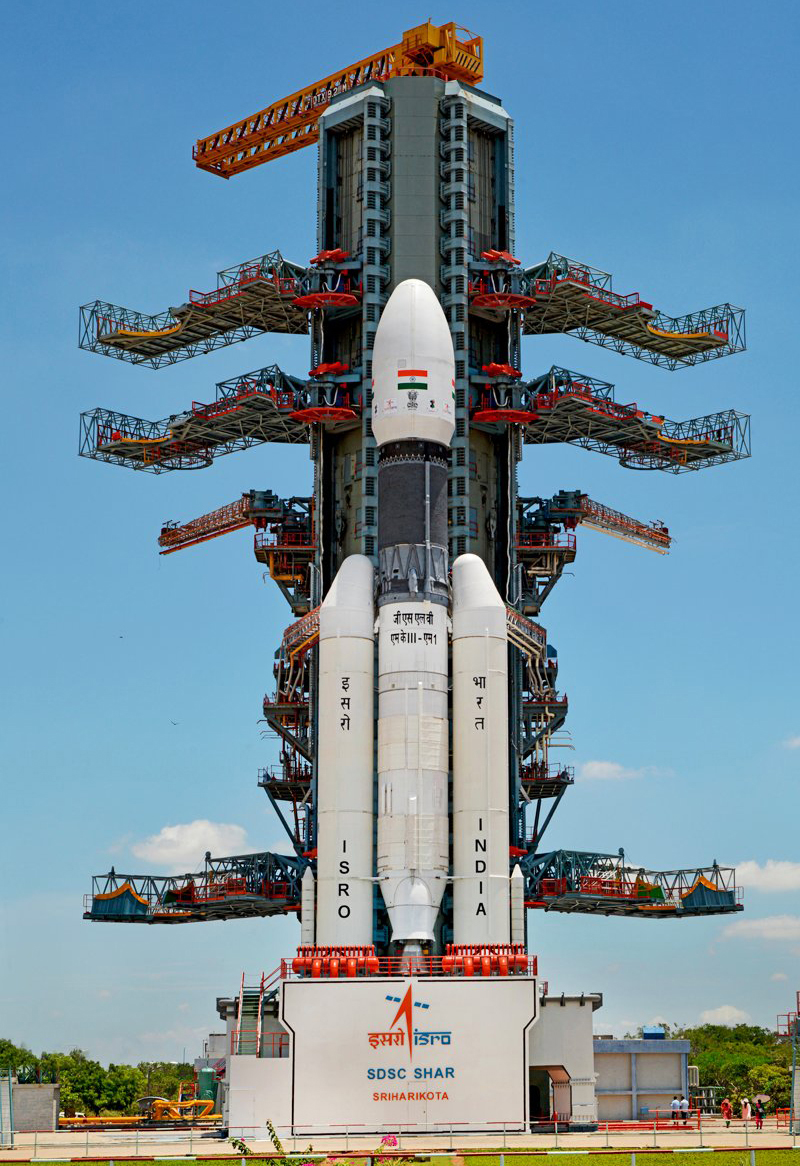 SRIHARIKOTA (AP), July 21: India’s second moon mission Chandrayaan-2 seeking to explore the unchartered Lunar south pole by landing a rover will be launched onboard its most powerful rocket GSLV-Mk0III-M1 from here tomorrow, a week after the lift-off was aborted due to a technical snag.
The Rs 978 crore mission, which has been rescheduled for Monday after scientists corrected the glitch in the rocket, will be launched at 2.43 p.m from the second launchpad at Satish Dhawan Space Centre here, over 100 km from Chennai.
The Indian Space Research Organisation (ISRO) scientists, who aborted the previous launch with 56 minutes left for the countdown to end on July 15, have taken quick remedial action based on an analysis carried out by a team set up to look into the snag and announced the rescheduled launch three days ago. A 20-hour countdown for the launch began at 6.43 pm Sunday, ISRO announced.
Chandrayaan-2 comes 11 years after ISRO’s successful first lunar mission Chandrayaan-1 which scripted history by making more than 3,400 orbits around the Moon and was operational for 312 days till August 29, 2009.
“Chandrayaan 2 is ready to take a billion dreams to the Moon now stronger than ever before! Join us for the launch on Monday 22 July, 2019 at 2:43 PM IST,” ISRO had tweeted on July 18 while announcing the rescheduled launch.
On the eve of launch, ISRO Chairman K Sivan said all preparations were on and the glitch had been rectified. “Whatever technical snag we observed on July 15 has been rectified. The vehicle is in good health… The (pre-launch) rehearsal has been successfully completed,” he told reporters at the Chennai airport on brief a stopover enroute here.
The 43.43m tall three-stage rocket dubbed ‘Baahubali’ for its ability to carry heavy payloads would blast-off carrying Chandrayaan-2 and inject the spacecraft into Earth orbit about 16 minutes later.
After lift-off, the 3,850 kg Chandrayaan-2, comprising an orbiter, lander and rover, will undergo 15 crucial manoeuvres before landing on the Moon, expected by the first week of September, Sivan said. Scientists would make soft landing of the lander in the South Pole region of the Moon where no country has gone so far, the ISRO chief said.
Billed as the most complex and prestigious mission undertaken by the ISRO since its inception, Chandrayaan-2 will make India the fourth country to soft land a rover on the lunar surface after Russia, the United States and China.
About 16.20 minutes after the lift-off, the GSLV rocket will inject Chandrayan-2 into 170 km x 39059 kms Earth orbit.
From then onwards, the mission will witness a series of manoeuvres by scientists to carry out different phases of the mission over the next 48 days.
Subsequent to the rescheduling of the launch, the space agency has tweaked the orbital phases, increasing Earth-bound phase to 23 days as against 17 days planned originally.
At the end of the Earth-bound phase, the orbit of the spacecraft will be finally raised to over 1.05 lakh km before nudging it into the Lunar Transfer Trajectory taking it to the proximity of Moon in the next two days. Then gradually over the next few days it will be brought to 100 X 100 km circular orbit when the lander will separate and after another few days of orbiting it will make a soft landing at a chosen place on the Lunar surface. The soft landing of the lander – Vikram carrying rover ‘Pragyan’, one of the toughest phases of the mission and described by the ISRO chief as “15 minutes of terror (filled moments), would be attempted between September 6-8. “Chandrayaan-2 is the next leap in technology as we attempt to soft land close to South Pole of Moon. The soft landing is extremely complex and we will experience approximately 15 minutes of terror,” he had said earlier.
The mission, which carries a total of 13 payloads, including three from the Europe, two from the US and one Bulgaria, seeks to improve understanding of the Moon which could lead to discoveries that will benefit India and humanity as a whole.
A Laser Retroreflector Array (LRA) of US space agency NASA is among the payloads and is aimed at understanding dynamics of Earth’s Moon system and deriving clues on Lunar interior.
Sivan Sunday said Chandrayaan-1 revealed the presence of water molecules and similarly there were possibilities of the latest mission returning successful scientific experiments.
“It is because of these reasons that Chandrayaan-2 has attracted attention not only from the Indian scientists but also from global scientists,” he said.
ISRO encountered the snag on July 15 when the liquid propellant was being loaded into the rocket’s indigenous cryogenic upper stage engine.
Veteran scientists heaped praise on ISRO for calling off the launch rather hurrying into a major disaster. President Ram Nath Kovind was present here on July 15 to witness the launch.
The launch of Chandrayaan-2 had missed its date earlier too when it was fixed for the first week of January. But it was shifted to July 15.
According to ISRO, the lunar South Pole is an interesting surface area which remains in shadow than North pole. There is a possibility of the presence of water in permanently shadowed areas around it, the agency said, adding craters in the South Pole region have cold traps and contain fossil record of the early solar system.
The lander ‘Vikram’, named after father of Indian space research programme Dr Vikram A Sarabhai, carrying the rover ‘Pragyan’, will be landed in a high plain between two craters at a latitude of about 70 degrees South of the moon.
Then the 27-kg ‘Pragyan’ meaning ‘wisdom’ in Sanskrit and a six-wheeled robotic vehicle, will set out on its job of collecting information on lunar surface.
A safe site free of hazards for landing would be decided based on pictures sent back by the camera onboard the lander and after touchdown the rover will carry out experiments for 14 Earth days, equals one Lunar Day.
The launch would be witnessed by nearly 5,000 people who will be accommodated at a viewing gallery, located a few kms from the launch pad, thrown open to the public by the ISRO in May last. (PTI)