Jammu, July 21: To promote the traditional culture of the State and to aware the masses, Bhartiya Lok Sangeet Kala Sansthan (BLSKS) staged 270th Saturday Series Musical Play “DOLI” in collaboration with Sangam Tru Art Production & National College of Computer Education as parts of its regular feature on the theme of “Save Girl Child” at Durga Bhawan Janipur, here.
The programe was inaugurated by Dr.Anju Dogra of Health Department, who was the chief guest Sh.V.K.Magotra, former regional director, directorate of field publicity , Government of India, Dr.Tara Singh Charak, Former Deputy Director, Health Department, J&K Government , Vinod Dogra, Chief Service Engineer Excide & R.P.Amla , Event Director were the Guests of Honors.
Speaking on the occasion chief guest lauding the role of Bhartiya Lok Sangeet Kala Sansthan and underlined the importance of staging such plays in all parts of the state to generate awareness among the masses about various social evils through theatre/drama which are still very powerful medium of communication & Sh.Vinod Dogra also highlighted the “Ladli Scheme ” Government of India. He said aim of Ladli Scheme is that to alter the position of the girl kid in family and the public. It also aim to help modify the people’s mindsets for appropriate taking care of the girl kid and as well as to offer the girl child their birth rights as started in Indian constitutions.
The Musical Play “DOLI” is written, produced and directed by M.L.Dogra (Chairman, BLSKS). He said that two conservative families who are bent upon getting their daughter and son married at tender age, ignoring the advice of intellectuals of the society. The marriage turns into a disaster making the life of both bride & groom miserable. Even bride ends her life owing to pangs of pregnancy at childhood after delivery of a dead baby. The cries of baby girl in womb of the mother caution all of us in the society “Don’t kill me. I will be your helping hand in old age”. According to the scheme the daughter child obtains free education & upbringing with additionally after 18 years of age she will be permitted to acquire One Lakh Rupees and also said cultural Organizations to contribute in enriching the cultural heritage of the country and inspiring the younger generation to follow the footprints of their elders in preserving the composite culture of the Nation.
The programme commenced with welcome song presented by the artists of BLSKS and students of the institute. Welcoming the dignitaries Usha Handoo,Troupe leader -Stap explained aims & objectives of the programme. 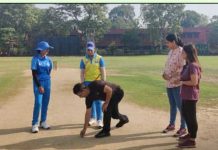 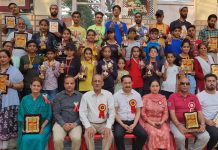 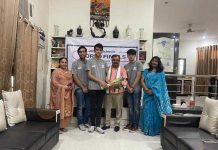 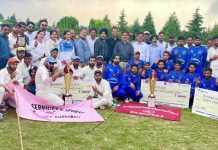 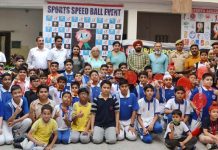 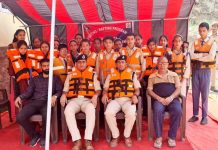 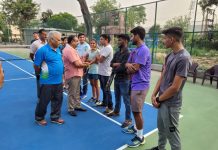 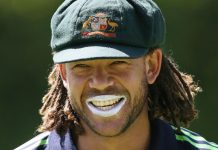 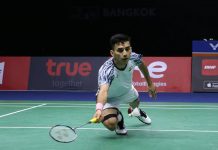