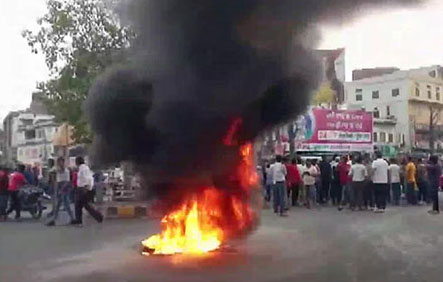 Jaipur, Jun 28: Two men slit the throat of a tailor in Udaipur, saying in a video post on social media that they are avenging an insult to Islam and triggering communal tension in the Rajasthan city.
Additional police force was deployed in the city as Chief Minister Ashok Gehlot appealed for calm.
In a video clip posted online, one of the purported assailants declared that they had beheaded the man and then threatened Prime Minister Narendra Modi, saying their knife will get him as well.
Indirectly, the assailants referred to Nupur Sharma, the BJP leader suspended from the party over a remark on Prophet Mohammad.
The tailor was recently arrested by the local police over some remarks made on social media by him.
The assailants entered his shop in the city’s Dhan Mandi area posing as customers. As the tailor took the measurements of one of them who later identified himself as Riaz – attacked him with a cleaver. The other man shot the brutal murder with his mobile phone.
The two men fled from the scene after the daylight murder, and later uploaded the clip on social media. In another video, the alleged assailant admitted that they “beheaded” the tailor and threatened the prime minister for lighting “this fire”.
As the videos circulated on social media, tension escalated. Shopkeepers in local markets downed shutters.
Shopkeepers stopped police from taking away the body, saying they will allow the removal of the corpse only after the murderers are arrested and compensation Rs 50 lakh and a government job given to the victim’s family.
On Twitter, CM Ashok Gehlot appealed to people to maintain peace and asked them not to share the videos.
“The guilty will not be spared. The entire police team is working on it with full alertness. I can imagine the anger which is there among people due to the murder. We are taking action accordingly,” he later told reporters in Jodhpur.
Udaipur Superintendent of Police Manoj Kumar also promised strict action.
“A brutal murder has happened. Broadly, it seems to be a planned murder. We are discussing the demands put forth by the family members. Strict action will be taken against the criminals. I appeal to people to maintain peace,” he said.
Gehlot said there is communal tension in the country and the prime minister should address the people. (Agencies)