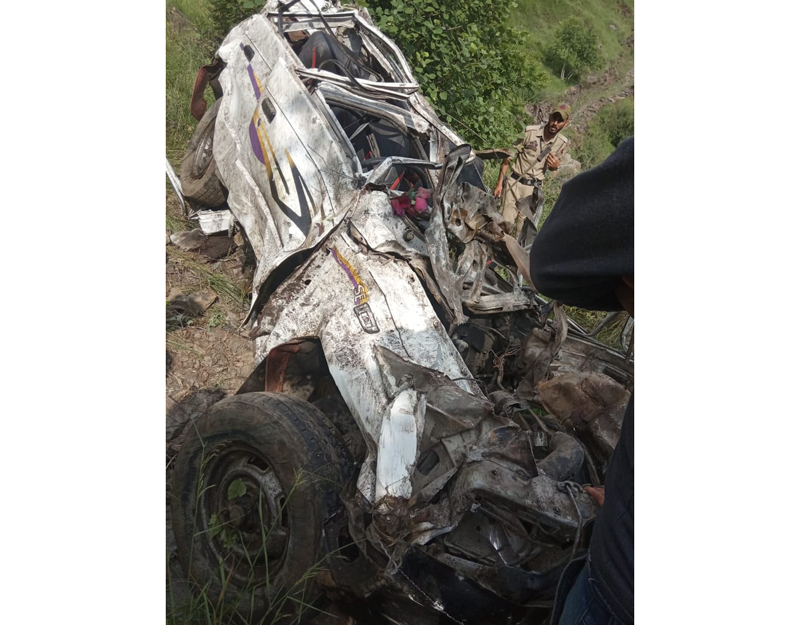 Ajay Raina
JAMMU, July 13: In a tragic accident, all eight persons including three minors were killed when the Tata Sumo they were traveling in skidded off the road and rolled down into deep gorge near Mutlihal area on Ukhral-Alinbass link road in district Ramban, here this evening.
The ill-fated vehicle bearing registration number JK03A-3777 was on its way to Alinbass from Ukhral, when the driver lost control over it as a result of which the Tata Sumo plunged into deep gorge near Mutlihal, resulting into on the spot death of 4 persons and injuries to 4 others. The accident took place due to rash and negligent driving.
On getting information about the accident, police team rushed to the spot and with the help of locals started rescue operation.

Click here to watch video
After hectic efforts, all the injured persons were shifted to Primary Health Centre (PHC) Ukhral from where they were later referred to District Hospital (DH) Ramban.
At DH Ramban, an injured person was declared as brought dead by the doctors, while another succumbed to his injuries during shifting to Government Med-ical College and Hospital (GMCH) Jammu.
Later, one injured person who was airlifted succumbed to his injuries at GMCH Jammu, while another, who was referred to MH Udhampur also died during treatment, thereby raising the death toll to 8.
The deceased have been identified as Tara Devi (54), wife of Dhayan Chand of Batote, at present Bari Brahmana, district Samba, Sanni Devi (10), daughter of Subash Singh of Kunchi, Moha-mmad Iqbal (19), son of Ali Bhadur of Alinbass, Nelofar Bano (16), daughter of Mohammad Ashraf Jaral of Khudmula, driver Javed Ahmed (45), son of Attaullah of Alinbass, Sandeep Singh (20), son of Sadu Singh of Upper Alinbass, Faizan Ahmed (14), son of Farooq Ahmed of Alinbass and Rahat Praveen (19), daughter of Mohammad Ashraf Jaral of Khudmula Batroo.
After completing medical and legal formalities, the bodies of the deceased will be handed over to family members for last rites.
A case under relevant sections has been registered at Ramsoo police station and investigation started.