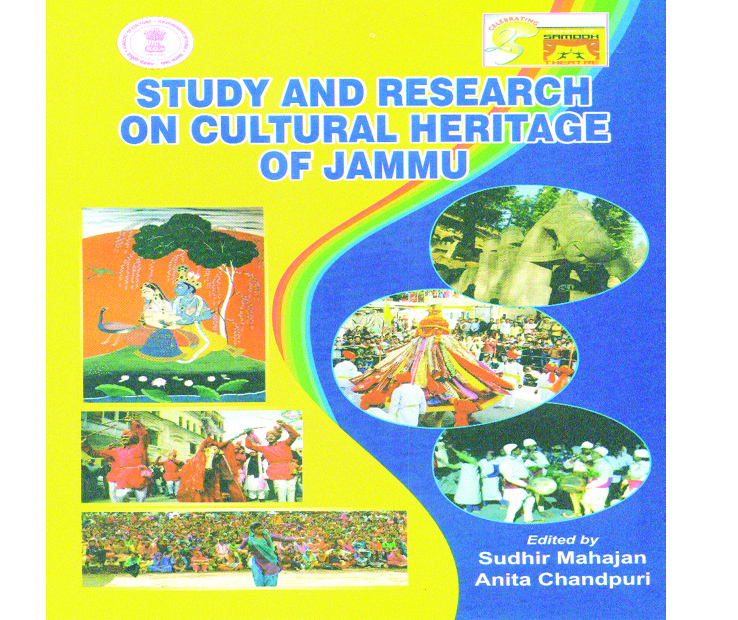 O P Sharma
Book: Study & Research on Cultural
Heritage of Jammu
Edited by : Dr Sudhir Mahajan & Anita Chandpuri
Published by : Highbrow Publications
Bari Brahmana, Jammu
Year : 2022
Pages : 184
Price : Rs 200
A valuable 184-pages book in English entitled “Study and Research on Cultural Heritage of Jammu” sponsored by the Union Ministry of Culture has recently hit the market.
It is a deep historical study about the rich culture and tradition of the Duggar land in UT of Jammu & Kashmir. It also gives glimpses of the proud cultural heritage of Kashmir valley.
Edited jointly by renowned writer and theatre authority, Dr Sudhir Mahajan and well known figure Anita Chandpuri (both son & daughter of J&K UT soil) has been well received by the cultural organisations and literary circles as also common people.
It is praiseworthy effort by the Union Ministry of Culture to throw light on Dogra and Kashmir proud “cultural heritage” and need to protect and preserve it for further upgradation/preservation for future generations.
Absorbing Narration
Dr Sudhir Mahajan and Anita Chandpuri, in the Editorial Note give the main objective of this detailed study to throw light on this important aspect of the cultural heritage of the Dogras and Kashmiris. Dr Kamal Sharma, president, Samooh Theatre has also expressed this views for promoting our precious cultural heritage.
This book showcases the rich cultural heritage of Jammu, be it, Dogras of Jammu, Paharis, Gujjars, and other diverse culture features of the valley. It also touches the nuances of Kashmiri culture.
OP Sharma, throws light upon the meaning and understanding of culture and heritage. In his writing, he discusses cultural heritage in depth and apprises readers about rich culture of J&K. He talks about the conservation of heritage sites in general, and of Jammu in particular. Mr Sharma says that cultural heritage of this part of country has been ignored and neglected by the past regimes and need to be paid due attention, at long last now by the state administration, Govt of India and also UNESCO.
Rajeshwar Singh Raju, a reputed writer co relates self-belief and inner self confidence of dogras by way of connecting it to Ramanya where Jambhava helps Hanumana to regain his lost powers and teaches to have self-belief in oneself.
Roop Krishan Bhat, in his writeup has given a scintillating perspective of cultural heritage of J&K. Talking about Jammu, he writes importance of Jammu as a strategically place on all routes to Kashmir, Ladakh, Poonch, Kishtwar and even with India as well as across PoJK and beyond.
Dr. Lalit Gupta, has presented a detailed account of Dogra culture in his writing. He has discussed in detail all the cultural aspects of Jammu be it customs, beliefs, folk deities, fair , festivals and other aspects. He touches on the forgotten customs which were once a part of rich Dogra culture.
Dr. Javaid Rahi, a well known Gojri author, has beautifully presented his viewpoint about the Gujjar culture in detail. He has laid emphasis on Gujjari music, discussed in detail about Bait, Baar, Tappa , Bolien, Geet and other sweet songs and music.
KD Maini, in his write up talks about Paharis and their rich and vibrant traditions and language.
Sudhir Mahajan, in his article , has also discussed about the folk theaters, folk music and songs and folk songs of Jammu region, namely : Bhagtan, Jagarna , Haran and Jattar. Mostly; lost in time but have to be revived urgently as these are our glorious past. Similarly, our folk dances, traditionls, paintings and music with folk dance of Jammu. We all know that dances keep our traditions alive and are a good medium of transfer of art from one generation to another. In his writing, Sudhir has given a detailed account of different folk dances of Jammu, namely Kud, Phumnia, Bhangra, Jagran, Keekli, Haran etc. Furthermore, he has also touched on the folk songs of Jammu. Folk songs as we all know are the life of people as it tells a story of time in music.
Shiv Doblia, has written an interesting piece about Basholi Paintings which is also one of the highlights of this book. He has provided with an overlook of Basholi painting and has also dealt in details the paintings and its significance. He has described the methods used in these paintings and how rulers patronized Basholi art.
Wali Mohmod and Asser Kishtwari, have also shared their knowledge about history, and culture of this part of the J&K UT.
How can Kashmir be left behind, so this book has also incorporated articles from Kashmir region to give it a complete perspective. Aiyash Airif has given a detailed account of theater in Kashmir. He has discussed the equipment, masks, dresses and musical instruments in detail. Another feature of his writing is that he has in detail described all the aspect of folk theaters present in Kashmir.
Vijay Wali has also contributed his article where he touches upon the cultural heritage of Kashmir.
Last but not the least, it is must in every library of college as well in university because, this book gives a peep into the rich cultural heritage of Jammu and Kashmir. All art and music lovers, historians, scholars and researchers would gain tremendously from this book, which is interesting , informative and instructive as well.
This book is a must for academician; scholars and students be in school, college or university as well as university.
(starline.syndicate.service@gmail.com)