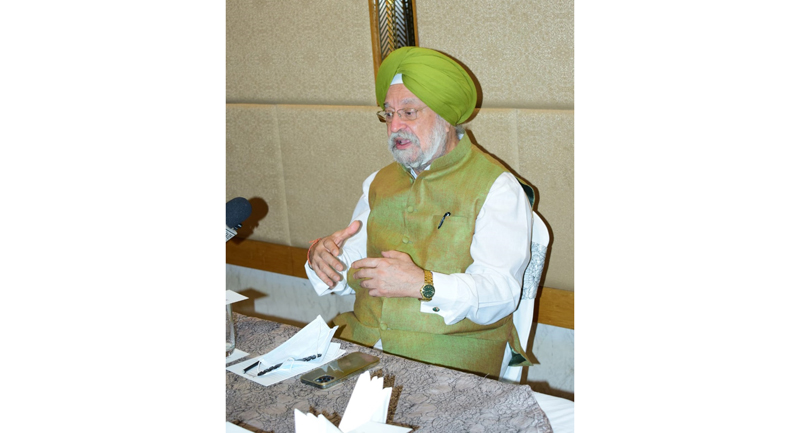 Nishikant Khajuria
JAMMU, Oct 13: Defending his Government on ever increasing fuel prices in India, Union Minister for Housing and Urban Affairs, Petroleum and Natural Gas, Hardeep Singh Puri today alleged that States do not want to bring petrol and diesel under the ambit of GST and hence their prices were not coming down.

Click here to watch video
During an exclusive interview with the Excelsior during his visit to Jammu today, he also held the previous Congress regime responsible for the situation because of its decisions on de-regulating petroleum prices and floating oil bonds, for which the present Government is now made to pay.
“Then Congress Government at Centre had de-regulated petrol prices in 2010 and diesel prices in 2014, which means international prices will reflect here. Since our 85 percent energy requirements are dependent on imports, the per barrel price increase in international market is ought to have direct impact at fuel prices in India,” he explained.
Reminding that over Rs 1.46 lakh crore of oil bonds with 15 years maturity floated by then UPA Government are being paid now, the Union Minister alleged that the present Government was facing the problem created by the previous regime.
“We are paying Rs 20 thousand crores per year for the oil bonds, floated by then Government to keep the fuel prices low at that time. If we too act in such irresponsible manner and issue oil bonds to keep the prices low at present, out next generation will have to pay for the same,” he said.
Claiming that no State Government agreed for bringing petrol and diesel under the ambit of GST, the Union Minister alleged that there was more politics in the name of increased fuel prices than addressing the issue.
“Tax at ad valorem rate is being charged by States Governments on petroleum prices, which is a major factor behind the increased prices. Kerala High Court had suggested that petrol and diesel should be brought under the ambit of GST but no State agreed for the same,” he said.
However, at the same time, Puri defended his Government for imposing an Excise duty of Rs 32 per litre on petroleum and said that the revenue thus generated was being spent on various welfare schemes.
“With this Rs 32, the Centre charges as tax per litre on petrol, we provide free vaccination, free housing, ration, LPG under Ujjawala, constructing toilets and spending on other welfare schemes for the people,” he said, adding that a cut on the excise duty will result into less spending on welfare schemes.
“We want the petrol prices to come down but there is no fun of slashing the Excise duty for the same if the State Governments do not come forward to address the issue,” said Hardeep Singh Puri.
Commenting on present situation in Jammu Kashmir in wake of recent killings by the militants, the Union Minister reiterated the Modi Government’s commitment to provide adequate security for foiling nefarious designs of the anti-nationals.
“As J&K is returning to stability and witnessing development, some misguided elements are trying to create trouble but this law and order problem will be tackled effectively by the Government,” he asserted.
Replying to a query, the Union Minister for Housing and Urban Affairs said that the Prime Minister’s commitment regarding J&K’s development is in full swing. There are many schemes and projects under Housing and Urban Affairs and Smart City Project is one of them, he added.
Calling Smart City Project an ‘Urban Revolution’, the Minister said that it is about providing urban services through technology and is comprised of Smart Traffic Management, Smart Security Management and many other facilities. He also informed that 3500 Special Purpose Vehicles are going to be tendered soon.
Regarding Gas pipeline, he said that it will reach Jammu by 2024. The Minister also said that Swachchta Abhiyan succeeded because it became Jan Andolan.

Meanwhile, Dr Hardeep Singh Puri today inaugurated Vertical Garden constructed under Flyover at BC Road, Jammu. The Vertical Garden project was initiated under Smart City Project which involves covering the flyover columns with vertical garden/ bio wall system to beautify the entire stretch.
The Minister was appraised that about 25 pairs of piers of the flyover between Dogra Chowk to KC Chowk have been covered and around 42000 plants of 12 different species are strung on bio-panels with plantation dedicated drip irrigation system for bio-panels which are serviced by two bore wells and four underground tanks has been used in the project. In addition to that landscaping of the area is also done.
The project approach is to bring about an overall aesthetic improvement below the flyover along with adding some greenery to give respite from pollution. In vertical gardens, various types of modular panels have been used along with geo-textile fabrics, growing media, irrigation systems and plants.
Member Parliament, Jugal Kishore Sharma; Mayor Jammu Municipal Corporation, Chander Mohan Gupta; Principal Secretary HUDD, Dheeraj Gupta; Joint Secretary MoHUA, Pankaj Kumar Singh; Deputy Commissioner Jammu, Anshul Garg; Chief Executive Officer JSCL, Avny Lavasa; Municipal Councillors of various wards, members of District Development Council and senior officers from Jammu Smart City, Jammu Municipal Corporation, Housing and Urban Development Department were present on the occasion.