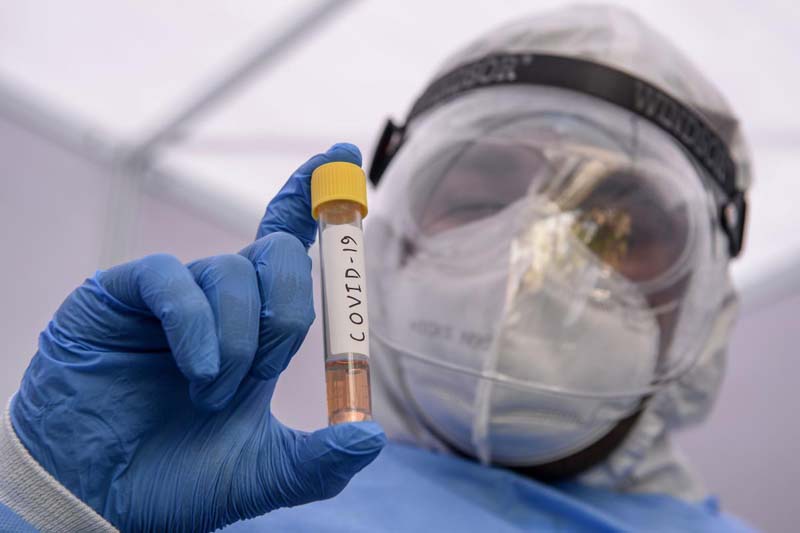 Fayaz Bukhari
SRINAGAR, July 2: In the single day highest death toll of COVID-19 positive persons in Kashmir, nine persons died here today taking the number of Corona patient deaths in the Valley past 100 mark while as senior National Conference leader and his family members were among 134 persons who tested positive for Novel Coronavirus taking the number of COVID-19 positive cases in Jammu and Kashmir to 7850.
Five deaths were reported at SKIMS hospital in Soura, three at SMHS hospital and one at Chest Diseases hospital.
A 75-year-old man from Kawoosa area of Budgam district died at SKIMS hospital in Soura this evening, five days after he was admitted. The patient had multiple diseases and died due to cardiopulmonary arrest.
Earlier, a 65-year-old man from Nadigam in district Shopian, who was admitted in hospital on July 1 as a case of Coronary Artery Disease with bilateral Community-Acquired Pneumonia (CAP) with Type-1 Respiratory Failure, passed away this evening.
A 65-year-old resident of Tarigam in district Kulgam, who was admitted on June 23 to the SKIMS hospital, died at the hospital. He was referred from GMC Anantnag in view of B/L CAP with ARDS. The patient was COVID-19 positive and died this afternoon.
Earlier, 55-year-old and 65-year-old men from Kulgam and Baramulla districts respectively died at the SKIMS hospital today.
The 55-year old man was from Yaripora area of Kulgam district and was admitted to the hospital on June 22 last night. He was known case of hypertension with (type-2 diabetes) with multifocal Encephalopathy (brain disease).
The 65-year old man from Sopore town of Baramulla district also died 10 days after admission to the hospital. The patient was hypertensive, T2DM (type-2 diabetes) with Community-acquired pneumonia (CAP) and he had sudden cardiopulmonary in the wee hours today.
A 60-year old man, a resident of Habba Kadal area of Srinagar died at Chest Diseases hospital Srinagar this morning. He was admitted to the hospital on June 29. He was diabetic, hypertensive and was suffering pneumonia and other ailments.
A 65-year-old man with bilateral pneumonia from Kulgam district died at SMHS hospital this afternoon. His sample was taken as soon as he was admitted to the hospital yesterday and it tested positive for the virus.
A 75-year-old man from Wadwan in Budgam district and a 65-year-old from Batamaloo, Srinagar with underlying ailments including hypertension and bilateral pneumonia died at the hospital. The woman was also suffering from Chronic Obstructive Pulmonary Disease (COPD). Both of them were admitted yesterday.
With the deaths, 117 COVID-19 positive people so far died in J&K with 103 from the Valley and 14 from Jammu division.
Srinagar district with 27 deaths has the highest fatalities followed by Baramulla 18, Kulgam 16, Shopian 13, Budgam 10, Anantnag 9, Jammu 8, Kupwara 6, Pulwama four, Doda 2 while one death has been reported from Bandipora.
And at least 28 Army and paramilitary personnel besides a senior National Conference leader and his family members were among 134 persons who tested positive for Novel Coronavirus taking the number of COVID-19 positive cases in Jammu and Kashmir to 7850.
An official said that 51 cases were reported from Srinagar followed by Baramulla 19, Anantnag 17, Kulgam 15, Budgam 12, Pulwama 10, Ganderbal 7 and Bandipora 2.
The senior leader of the NC who tested positive was released from jail two weeks ago on June 17 after over 10 months. He had filed a PIL before the High Court seeking his shifting to home as he feared contracting Coronavirus. It is not known where he got infected but there are chances that he might have been infected while in custody. His three family members have also tested positive.
His son has tweeted about his father and 3 other family members getting infected with Coronavirus. He has urged his friends and well-wishers to pray for his father and other family members.
Medical Superintendent SKIMS Soura, Dr Farooq Jan told Excelsior that 2569 samples were processed at the Viral Diagnostic Laboratory of the hospital and 65 tested positive for the virus.
They include 16 each from Anantnag and Srinagar, 13 from Kulgam, eight from Rashtriya Rifles of army and CRPF, two each from Pulwama, Ganderbal and Budgam besides one each from Kupwara, Shopian, Bandipora and Baramulla.
The Army cases are from 42 RR based at Rajpora Pulwama and CRPF cases are from 182 Battalion of CRPF based at Pulwama, 61 Battalion based in Srinagar, and 40th Battalion based in Anantnag.
Principal SKIMS Bemina, Dr Riyaz Untoo, told Excelsior that 503 samples were processed at the hospital’s lab, and 27 tested positive for COVID-19 including 23 from Budgam and 12 from Srinagar.
Among the cases, 14 are from paramilitary BSF personnel stationed at Sanat Nagar Srinagar.
An official said that 839 samples were processed at CD hospital Srinagar and 48 tested positive for Novel Coronavirus. They include 7 Army personnel from Badami Bagh Cantonment Srinagar samples of whom were received from 92-Base Hospital, one Police man from DPL Ganderbal and three pregnant women.
Meanwhile, 80 more COVID-19 patients have recovered and were discharged from various hospitals in Kashmir.