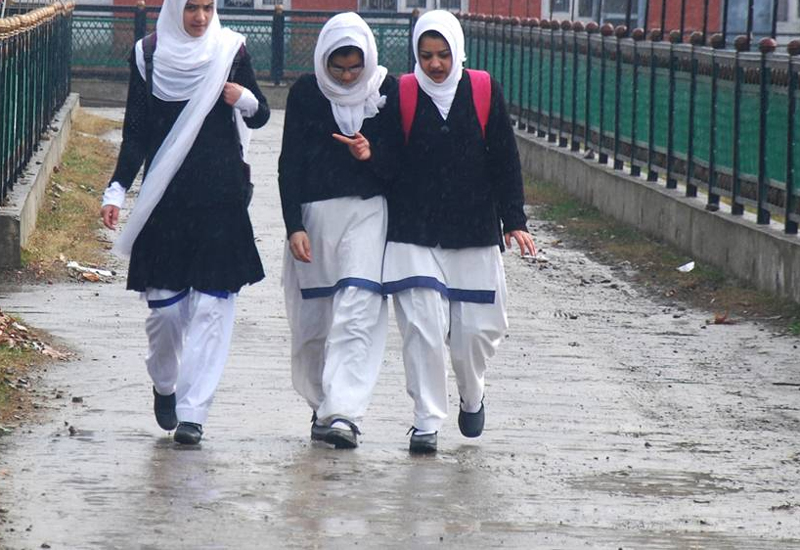 SRINAGAR, Oct 8:
Some schools in the Valley have found a way around the protest-shutdown against the revocation of Jammu and Kashmir’s special status by holding early-morning classes for students to minimize academic losses before exams later this month.
The children, sans the uniform, in Sebdan area of Budgam district put school bags on their backs and walk to a house where their teachers wait to impart lessons that need to be covered before the final examinations.
“We have been holding special classes in this house, instead of the school building, to help students cover the syllabus for the current academic year,” Mohammad Abid, a teacher at the local private school, said.
The ‘new school’, as it is called by the students, operates from 8.00 am to 11.00 am everyday before the kids return safely to their homes.
Bashir Ahmad, father of an 8th standard student, is waiting for his son outside the makeshift school to ensure that his son goes back straight to home.
“My son is 14 years old and I do not want any harm to come his way while ensuring that he keeps up with his studies,” Ahmad said without elaborating.
He was apparently referring to the incidents where kids as young as 10 year old indulged in pelting stones at security forces in some areas of nearby Bemina locality while on way to the special classes.
Many students are happy that they are getting their classes in a very informal atmosphere.
“I think this is cool… This informal atmosphere of not having uniform and also not following the rigid timetable for classes should be replicated in regular schools as and when they re-open,” Bismah, a seventh standard student, said.
However, there are others who miss the fun associated with going to a regular school.
“Discipline becomes the first casualty but we have make do with whatever is available to us academically right now. Schools are not only about cramming up new lessons. Schools also help students in personality development,” Aatif Nazir, an 8th standard student, said.
There are several other schools in Sebdan and nearby Bemina which follow the same routine to ensure that the protest-shutdown, which entered the 65th day today, does not severely affect the education of the kids.
In some areas of Srinagar city, community schools have come up, where teachers have volunteered to teach students in their respective areas irrespective of the schools they come from.
One such school is functioning in Sarai Bala area but the community school organisers refused to talk about the initiative.
The State Government has made several attempts to make schools in the Valley fully operational but has failed so far.
While the teaching staff in both Government and private schools report to work, the students have stayed away.
The latest attempt by the Government was last week when Kashmir Divisional Commissioner Baseer Khan announced that schools will reopen on October 3 while colleges will function from October 9.
However, the schools have remained closed till date, giving no hope of reopening of colleges on Wednesday. (PTI)