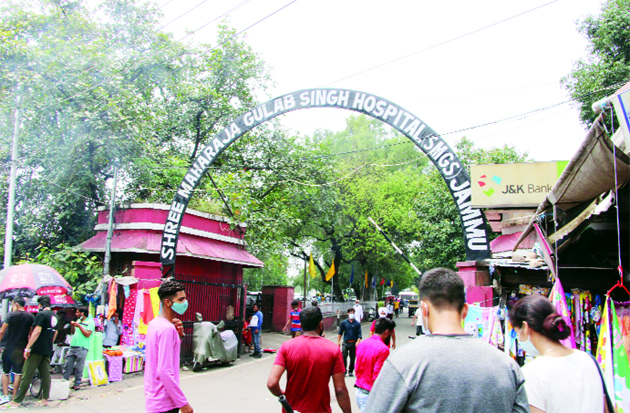 Shiv Chander Sharma
Although democratic system of Government is appreciable as compared to autocratic rule, yet the kings cannot be ignored even in present times as many of them have made great contributions during their respective eras of rule which have become glorious chapters of history now.
The Dogra rulers of J&K are behind none in this regard and have made great contributions during their rule which are still being remembered by the people and many in present times talk of great vision of the kings. The Dogra rulers were very much concerned about the people of their state. Shri Maharaja Gulab Singh Hospital (SMGS) in Jammu speaks volumes of great vision of the Dogra rulers.
Built in 1940s by last ruler of J&K, Maharaja Hari Singh, who is known for signing Instrument of Accession of J&K with India, SMGS hospital on Shalamar Road adjoining to Civil Secretariat building served the people of entire Jammu region till late 1980s as main hospital when the main hospital with most of the departments were shifted to newly constructed hospital, the Government Medical College (GMC) building at Maheshpura in the city. Still this buidling houses several departments including gynaecology, paedirtics and ENT.
When Maharaja Hari Singh had laid foundation of this hospital on May 6, 1940 the population of Jammu city was few thousands. But going by the facilities and the size of the massive structure one can easily imagine that Hari Singh might have kept in mind the increase in population and accordingly had got the design of the hospital building prepared even in 1940.
Though the present main hospital, GMC is massive complex as compared to SMGS hospital but the fact is that the SMGS hospital building was sufficient to meet the medical requirements of the people till late 1980s when the population of Jammu increased to several lakhs. It is still the main hospital for children and gynaecology.
The double storey structure of the old styled building has quite spacious wards on both the floors. The design is such that all the wards are airy from all sides and rooms are also airy. The operation theatres built in 1940s still serve the purpose though now only in gynaecology and ENT departments.
The location of this ancient building in the city centre is such that still it is approachable despite massive growth of the city and is well connected with the main Flyover of Jammu city. There is a separate blood bank though now it is part of the Government Medical College. The parking lot of the building is also spacious and it has its lawn in the front.
When Maharaja Hari Singh had started the construction of this hospital no one had imagined that population of the city will see sudden rise to reach over 15 lakh in the start of 21st century from few thousands just before 1947. But the Dogra ruler had this vision and this is proved by seeing the SMGS hospital.