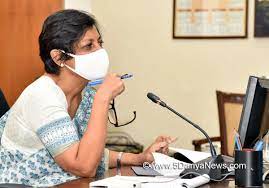 CHANDIGARH, July 17: Punjab Chief Secretary Vini Mahajan on Saturday said that major infrastructure development projects worth Rs 69,000-crore are underway to give boost to the agriculture and industrial development in the state.
The Chief Secretary was chairing a meeting with the administrative secretaries of various departments and Deputy Commissioners (DCs) to review the progress of the ongoing work on the infrastructure development projects here.
She directed the concerned departments and all the DCs to expedite the present pace and ensure time-bound completion of all the major infrastructure projects in the state.
Ms Mahajan asked to execute eight major infrastructure development projects, under Project Monitoring Group (PMG), which include Rajpura-Bathinda and Bhanupali-Bilaspur railway line, and construction of a dedicated freight corridor, involving an investment of Rs 69,000 crore on a war footing.
“These projects hold the key to future agricultural as well as industrial growth in the agrarian state. They would act as a fresh lifeline for Punjab, which is otherwise landlocked,” opined Ms Mahajan, while asking the official machinery to be more proactive in implementation of these projects.
Giving out a detailed presentation of various projects, Principal Secretary Public Works (B&R) Vikas Pratap informed the Chief Secretary that eastern dedicated freight corridor from Sahnewal (Punjab) to Dankuni (West Bengal) with a length of 1,856-km was being constructed which shall facilitate high-speed movement of freight from Punjab to the ports on the eastern as well the western coasts of India.
The length of this corridor in Punjab is 88-km and it also involves construction of 26 railway over and under bridges. This project shall be beneficial for smooth and fast movement of food grains, and industrial goods from Punjab to other states, he further informed.
The meeting also reviewed the progress of major ongoing national highway projects in Punjab, which include Delhi-Amritsar-Katra expressway to connect Amritsar, Ludhiana, Jalandhar, Kapurthala Sangrur, and Patiala to the national capital Delhi. Apart from this, other key projects, including Amritsar-Bathinda greenfield highway, Jalandhar and Ludhiana bypass, Ludhiana-Ropar greenfield highway through Kharar, and Malout-Abohar-Saduwali highway, were also reviewed with the NHAI and the PWD officials. Ms Mahajan directed all the DCs to coordinate with the PWD (B&R) and the NHAI officials concerned to resolve the issues of land acquisition, shifting of utilities and forest clearances, if any, to ensure the time-bound completion of these major highway projects as well.
The Principal Secretary PWD (B&R) informed that four retired officers have been appointed as dedicated arbitrators to adjudicate any challenge being preferred by the landowners to the compensation awarded by the land acquisition collectors to expedite permissible legal relief to the landowners.
“PWD is also in the process of getting two more retired officers appointed as dedicated arbitrators to cover all 23 districts in the state,” he added. (UNI)