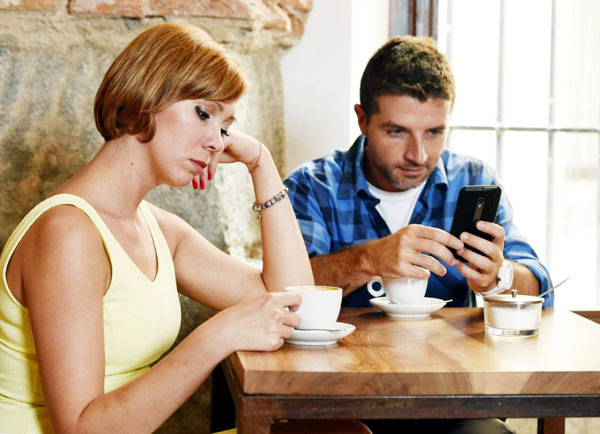 Niraj Dubey
Nothing kills romance faster than pulling out a smartphone, and now, research confirms it. Being attached to your phone seems to sabotage your attachment with your loved one.Plenty of research has been done on how cell phones affect relationships. Some suggest that they’re a positive influence-that being in easy, intimate touch with a partner through calling and texting makes people happier and more secure in their relationships. Other research reveals the dark side of cell phones.

It is ruining marriages and other inter-personal relations. So it’s still the same familiar story of ‘Man vs Machine.’ Hence, the smartphone has been described as “the electronic enemy of love.” Today, these devices are playing the role of the ‘other man/woman’ in relationships. In other words, they are now responsible for snatching your spouse or partner away from you – maybe even your entire family! People who were more dependent on their smartphones reported being less certain about their partnerships. People who felt that their partners were overly dependent on their devices said they were less satisfied in their relationship. Do you feel neglected when your partner is on their phone? Does your time together get disrupted by texts, emails, or games? Has technology intruded on your romantic relationship?While the big 3 disputes for couples’ arguments used to be sex, money, and kids, it seems smartphones are rapidly rising up that list. The study included 143 married or cohabiting women, the majority of whom reported that phones, computers and other technology devices were significantly disruptive in their relationships, couple hood and family lives. Specifically, higher levels of technoference were associated with greater relationship conflict and lower relationship satisfaction. Further, it seems greater levels of smartphone and other relationship technoference makes people more depressed and lowers their overall life satisfaction. When your partner attends to a phone instead of to you, it feels like rejection-> it hurts. Feeling ignored when your partner is on their phone can feel as bad as being shunned. When a conversation, meal, or romantic moment is disrupted because of a text, email, or any other task, the message is, “What I’m doing on my phone is more important than you right now,” or, “I’m more interested in my phone than in you,” or, in some cases, “you’re not worthy of my attention.” It is because the other person is likely to experience such moments as rejections that technoference can literally impact their psychological health. Rejections, even small ones, tend to be extremely painful, as your brain responds the same way it does to physical pain. Over time, these small wounds can fester and increase conflict, lower relationship satisfaction, and lead to a drop in life satisfaction and an increase in symptoms of depression.Technology has added thousands of fantastic advantages to our society. It allows us to be more efficient and to accomplish thousands of tasks that were simply not possible a few years ago.However, some parts of the new technology are likely to contribute to a rise in the divorce rate in America and perhaps throughout western civilization.Millions of husbands and wives are now addicted to their cell phones, their lap tops, their desktops and their tablets.some studies show that Americans check their phones every six and a half minutes during waking hours, or roughly 150 times each day. Sadly, the smartphone is a jealous lover – demanding attention all day through calls, texts, Facebook, Pinterest, news feeds, sports scores, video streaming, music and endless apps. We sleep with our phones on the nightsand cradle them as we walk, pocket them as we travel, set them on the counter to help us make dinner and rest them comfortably on the table as we eat.
They have become our constant digital companion. It’s pretty common walking into a restaurant and spotting a family out for dinner and, not a word exchanged all the while they are there because they are all engrossed with their phones.A new national survey recently conducted in China blames ruined marriages and divided families squarely on the exponential rise in smartphone use in the country.The survey by the All China Women’s Federation (ACWF) found that 60 percent of married respondents complained about intrusion from the smartphone use in their relationship.Of course, this phenomenon is not unique to China alone, but with more than 500 million active smartphone users, it presents a good reference point. After 25 years of marriage, I believe the best time for meaningful communication that brings life to a relationship is at the end of the day – when you’re lying in bed together before going to sleep. This is when couples should be talking about the highs and lows of their day; discussing deep topics; snuggling, kissing or making love; and praying together. But smartphones wreck this key moment! Sadly, research has shown that most couples spend an average of only four minutes per day in meaningful conversation. This is exactly how sacred pillow-talk time is hijacked.
A husband and wife can be lying next to each other in the same bed but feel worlds apart. The author’s like to conclude this informative article by this beautiful quotation, “Never make the one you love feel alone, especially when you’re right there.”
The author is Sr. Faculty (Govt. Engg. College (GCET)-Jammu)