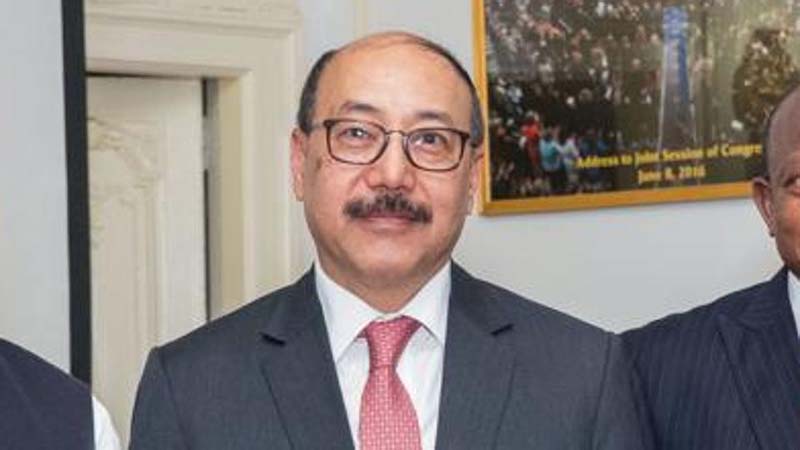 NEW DELHI: Seasoned diplomat Harsh Vardhan Shringla took charge as India’s next foreign secretary on Wednesday, and asserted that he would work with India’s partners on key issues, including ensuring an “undifferentiated and unambiguous” approach to terrorism.
A 1984-batch officer of the Indian Foreign Service (IFS) who last served as India’s envoy to the US, Shringla replaces Vijay Gokhale and has a fixed two-year tenure. Gokhale retired on Tuesday.
Shringla is taking over the high-profile post at a time when India is facing several foreign policy challenges including battling criticism from some countries and international fora of the country’s new citizenship law.
In a statement after assuming charge, Shringla said he looks forward to working with India’s many international partners on several fronts, including enhancing developmental and economic linkages, connectivity with neighbours, sustaining the gains of a rules-based multilateral order as well as “seeking a shared, undifferentiated and unambiguous approach to terrorism and the threat it poses to free societies”.
Several other recent opportunities and challenges related to the cyber domain and emerging technologies will also receive attention during his tenure, the 57-year-old diplomat said, adding that the external affairs ministry fully appreciates the critical nature of these issues for the country and the planet.
“I entered the IFS during the Cold War and I am entering the FS’ office at a time when global warming has become a pressing concern,” he said in the statement.
Sharing the Indian developmental experience with countries of the global South, especially with friends in Africa and Latin America, will continue to be a priority, Shringla said, adding that he also looks forward to the opening of new diplomatic missions and the inauguration of new initiatives.
Speaking to reporters before taking the charge, Shringla said he was very clear that foreign service is a public service and its every effort should be dedicated to contributing towards the nation in the form of its security and prosperity through external engagements.
“I am as committed to the ministry’s role in nation-building as I was almost 36 years ago when I entered these portals as a young professional. I look forward to functioning under the guidance of the Prime Minister and the External Affairs Minister, our political leadership and with the support and cooperation of my colleagues both within the ministry and outside,” he said.
Welcoming Shringla, External Affairs Minister S Jaishankar tweeted that he was confident that the new FS’ warm personality and enormous experience would help take “Team MEA” to greater heights.
In his statement, Shringla also said,”we are service providers to our citizens and our people, whether at home or abroad. Enhancing the security and prosperity of India through external ties and the well-being of all Indians, wherever they may be, is our mission statement.”
The seniority principle was not followed in appointing Shringla to the top post. Indian High Commissioner to the UK Ruchi Ghanshyam, a 1982-batch IFS officer, was also in contention for the post.
Shringla had played an important role in successful hosting of the “Howdy Modi” event in Houston in September where US President Donald Trump and Prime Minister Narendra Modi jointly addressed the Indian diaspora.
“I am conscious of the fact that I am stepping into the shoes of my illustrious seniors and stalwarts who have upheld the highest standards of professionalism and integrity to their work. In this context my two immediate predecessors come to mind — Foreign Secretary Vijay Gokhale, who has set impeccably high standards, and Jaishankar, who we know is one of the leading authorities on foreign policy in India and anywhere in the world,” Shringla told reporters.
During his diplomatic career, Shringla has held several positions in New Delhi and abroad, and is considered an expert on India’s neighbourhood.
He has served as India’s top envoy to Bangladesh and Thailand. He has also served in France, Vietnam, Israel and South Africa.
In the headquarters of the ministry here, Shringla has also served as Joint Secretary looking after India’s ties with Bangladesh, Sri Lanka, Myanmar and Maldives. He has also headed the ministry’s United Nations Political and SAARC divisions.
Shringla is a graduate from prestigious St. Stephen’s College of Delhi University. He has also worked in the corporate and public sectors before joining the IFS. (AGENCIES)