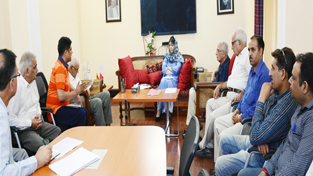 Excelsior Correspondent
JAMMU, Apr 19: Several deputations from different walks of life met the Chief Minister, Mehbooba Mufti here today and apprised her of their problems and sought their resolution.
A deputation from Ramsoo sought construction of a mini grid station at Neel. They also demanded carving out of an educational zone and opening of a health centre in the area.
A deputation of representatives of Bari Brahmna Industrial Association sought taking of measures to give relief to local small and micro industrial entrepreneurs. They also requested grant of central assistance to the local industry on the pattern of North Eastern region besides easing of formalities in tax remissions.
A deputation of J&K Patwar Association demanded creation of more Patwar halqas in the State, creation of staff and removal of pay anomaly of Patwar cadre. A deputation of dental surgeons demanded creation of more posts to provide job opportunities to them.
A deputation of members of civil society from Gujjar Nagar and Rajendra Bazar requested for keeping an eye on anti-social elements who intend to disturb peace and communal harmony in the province. They also sought creation of opportunities for youth to train them in various skills. A deputation of All India Backward Classes Union demanded strict implementation of various welfare schemes aimed at the upliftment of these classes.
Another deputation from Surinsar demanded upgradation of Middle School, Charala to a High School. They also demanded augmentation of drinking water facility and connectivity in the area and creation of a halt point for all the trains passing through on Jammu-Katra line. Another deputation from R S Pura demanded construction of a playfield and conservation of a local pond at Bagga Janna village of the constituency.
The Chief Minister listened to the demands of the deputations patiently. She assured to look into the same and take appropriate action at the earliest.