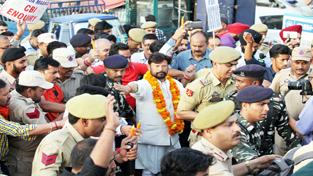 Excelsior Correspondent
JAMMU, Apr 19: Former Forest Minister and senior BJP leader, Ch Lal Singh took out a rally here, today in support of the people of Rassana village in Hiranagar tehsil of Kathua district demanding CBI probe into the murder of a minor girl in the area in January this year.
“We demand CBI probe to punish the real culprits as has been demanded by the people of the area”, said Lal Singh while interacting with reporters while starting the rally.
A large number of supporters of BJP leader joined the rally who too were raising slogans in support of his demand of CBI probe.

Click here to Watch Video
Lal Singh said that Justice be given to Jammu people who have been dubbed as rapists. “we strongly condemn this allegation”, he added.
The rally started from Indira Chowk and after passing through Hari Market, Raghunath Bazar and other markets it culminated at Press Club here. The people including shopkeepers enroute gave a good response to the BJP leader.
It may be recalled that BJP leader along with his another ministerial colleague, C P Ganga resigned from the Council of Ministers some days back after Chief Minister, Mehbooba Mufti succumbing to opposition pressure demanded their resignation for joining the rally at Koota Morh in support of the demand of the people of Rassana.
Two days back the BJP leader took out a huge rally from Jammu to Kathua in support of the demand of the people of Rassana.