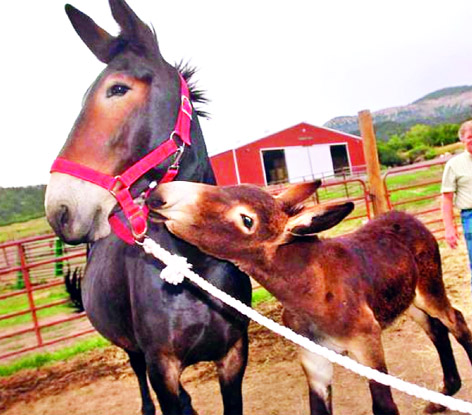 Advitya Jandial
Animals of different species rarely get it on, and when they do, they rarely produce offspring.
But even rarer than the ligers(Male lion + Female tiger), zonkeys(Male zebra + Female donkey), camas(Maledromedary camel + Female llama), and beefalo(Male American bison + Female cattle) of the world are hybrid animals capable of making babies of their own. In fact, the idea of a mule (the hybrid progeny of a female horse and a male donkey) having its own baby is so impossible that the ancient Romans used to employ the saying of “when a mule foals” as a metaphor for the impossible – the same way that Americanssay “When pigs fly”, as the French say “When the rooster lays eggs”, or as Indians say “When the Sun rises from the West.”
When it reportedly happened in Morocco some time ago, locals feared it and signalled the end of the world. In Albania in 1994, it was thought to have unleashed the spawn of the devil on a small village.
Here’s why: in order to successfully reproduce, animals need to create viable Miosis(reproduction cells).Mitosis(Normal body cells) have two copies of each chromosome – one from the animal’s mom, and one from dad, sort of like two full decks of cards – and both decks can simply be duplicated and then split off to form a new cell. But miosis are different: they’re produced by taking each set of chromosomes and swapping a bunch of cards between decks before breaking them up to form four cells, each with just one complete deck of cards. This card-swap works when the decks in each set come from a mom and dad of the same species, because they have all the same cards in the same order, so genes for eye-colour get swapped with other genes for eye-colour, and stripe pattern genes get swapped with stripe-pattern genes.
But in the cells of hybrid animals, the decks aren’t identical because they came from parents of different species, so an eye-colour card might get swapped for a paw size card, or a bone-making gene for a kidney-making gene, producing two really weird decks that give rise to totally non-functional miosis and unhealthy offspring.
However, for reasons we really don’t understand, it might be possible for a hybrid animal to skip over the card-swapping step altogether and create new miosis that contain only the mom’s DNA.
We’ve actually only seen this happen in female mules: there are a handful ofdocumentedcases in which mules have made babies from eggs containing only their mother’s DNA;bizarrely, this means that each female mule’s offspring was genetically also her half-sibling.
So, as far as we know – pigs never fly, but once in a great while, a mule foals.
(The author is a student of 7th class of Jodhamal Public School, Jammu and Bird & Animal-watcher)