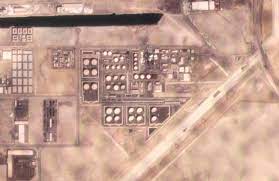 Dubai, Jan 18: Satellite photos obtained by The Associated Press on Tuesday appear to show the aftermath of a fatal attack on an oil facility in the capital of the United Arab Emirates claimed by Yemen’s Houthi rebels.
The images by Planet Labs PBC analyzed by the AP show smoke rising over an Abu Dhabi National Oil Co. Fuel depot in the Mussafah neighborhood of Abu Dhabi on Monday. Another image taken shortly after appears to show scorch marks and white fire-suppressing foam deployed on the grounds of the depot.
The Abu Dhabi National Oil Co., known by the acronym ADNOC, is the state-owned energy firm that provides much of the wealth of the UAE, a federation of seven sheikhdoms on the Arabian Peninsula also home to Dubai.
ADNOC did not immediately respond to questions from the AP asking about the site and damage estimates from the attack. The company said the attack happened around 10 a.M. Monday.
“We are working closely with the relevant authorities to determine the exact cause and a detailed investigation has commenced,” ADNOC said in an earlier statement.
The attack killed two Indian nationals and one Pakistani as three tankers at the site exploded, police said. Six people were also wounded at the facility, which is near Al-Dhafra Air Base, a massive Emirati installation also home to American and French forces.
Another fire also struck Abu Dhabi International Airport, though damage in that attack could not be seen.
Senior Emirati diplomat Anwar Gargash blamed the Houthis for the attack, saying on Twitter that Emirati authorities were handling the rebel group’s “vicious attack on some civilian facilities” in the United Arab Emirates’ capital with “transparency and responsibility.”
“The tampering of the region’s security by terrorist militias is too weak to affect the stability and safety in which we live,” he said.
Yemen’s Iranian-backed Houthi rebels claimed they were behind an attack targeting “sensitive Emirati facilities.” In a press conference late Monday, military spokesman Yehia Sarea said, without offering evidence, that the Houthis targeted the airports of Abu Dhabi and Dubai, as well as an oil refinery and other sites in the UAE with ballistic missiles and explosive-laden drones.
Although the UAE has largely withdrawn its own forces from Yemen, it is still actively engaged in the conflict and supports Yemeni militias fighting the Houthis.
The incident comes as the Houthis face pressure and are suffering heavy losses. Yemeni government forces, allied and backed by the UAE, have pushed back the rebels in key provinces. Aided by the Emirati-backed Giants Brigades, the government forces took back the province of Shabwa earlier this month in a blow to Houthi efforts to complete their control of the entire northern half of Yemen. (Agencies)