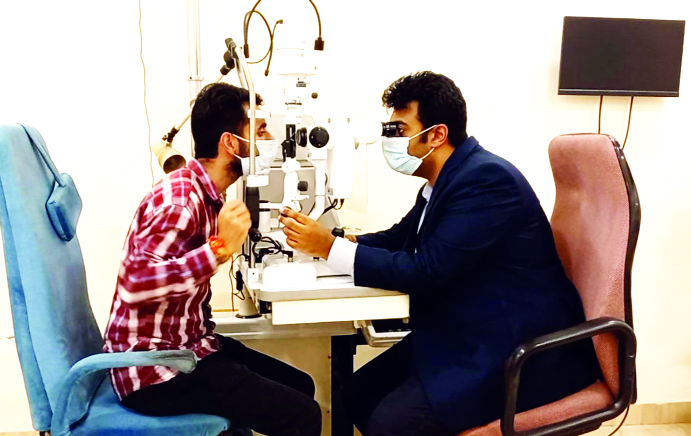 Govind Sharma
Sachdeva Netralaya- a multispecialty eye hospital located at Gandhi Nagar (Jammu) is providing world-class advanced diagnostic and specialist services including surgeries under one roof to the people of Jammu and Kashmir.
Speaking to the Excelsior, Dr Abhishek Sachdeva, owner of the Hospital said that the Hospital was started in the year 1995 by his father Dr Sanjay Sachdeva and later on he and Dr Isha Gupta (Anaesthetist) joined it. He said Sachdeva Netralaya is the first NABH accredited Eye Hospital in J&K, which makes him feel proud. “Further, the Centre is also empanelled under ECHS, ESI, Ayushman Bharat and other TPAs,” he informed.
Dr Abhishek shared that there are different diseases related to eyes such as Dry Eyes, Refractive Error, Amblyopia (also called lazy eye), Cataract, Glaucoma, Squint, Oculoplastics and all these diseases are being treated by the specialists through advanced procedures in this Netralaya.
He disclosed that cataract surgeries are being done in the Hospital through Phacoemulsification technique without a cut. He said in this technique, a lens is implanted into the eye by giving a very small incision of 2.2 to 2.8 mm at the edge of cornea. He further informed that now-a-days, lenses are also available in many varieties such as Monofocal, Toric, Multifocal, etc and one can choose the best lens for him/her depending on his/herself lifestyle and specific visual needs.
“Amblyopia (also called lazy eye) is a type of poor vision that happens in just one eye. It develops when there’s a breakdownin working together of brain and eye and the brain can’t recognize the sight from one eye. Over time, the brain relies more and more on the other, stronger eye – while vision in the weaker eye gets worse. Amblyopia starts in childhood, and it’s the most common cause of vision loss in kids,” he shared.
Dr Abhishek informed that till date the treatment of Amblyopia was being done by traditional method of patching on strong eye but now, with the help of some computer softwares, this disease is being treated. We have also adopted these advanced methods of treating Amblyopia, he added.
“Recently, we have also launched Child Eye Care and Eye Strain Evaluation which entails that prevention should be the first line of defence. People, particularly children should go for an eye check up at least once in a year if they want their eyes to remain healthy for a long time,” he added.
He said Sachdeva Netralaya is also well equipped in the management of Squint, Glaucoma, Oculoplastics and Corneal diseases. The Netralaya with its sister concern JK Lasers is the first Lasik Laser (spectacle removal) centre of J&K. The Hospital has a full-fledged Vitreo Retinal Department, managed and operated by Dr Sunil Mehra (Retina Specialist), who has been trained at Sankara Netralaya, Chennai. Dr Mehra, he said, is associated with them for last 8-10 years and provides his services in Sachdeva Netralaya on every Saturday.
At the CSR level, Dr Abhishek said, the Hospital has been regularly conducting free eye camps in rural and far-flung areas of J&K. He said Sachdeva Netralaya is empanelled with ECHS, ESI, Ayushman Bharat, major insurance companies and TPAs. All Government listed eye surgeries are being done free of cost under Ayushman Bharat scheme in Sachdeva Netralaya,” he revealed.
Discussing preventions from eye diseases, Dr Abhishek informed that one should not spend much time on digital screen as it affects our eyes. He said those having computer jobs should try to give 5 minutes of rest to their eyes after every half an hour. “Diabetes directly affects our retina so one should ensure that his/her blood sugar is under control and should go for an eye-checkup every 6 month,” he added.
Dr Abhishek informed that now-a-days they can detect even a minor problem in the eyes through Optical coherence tomography (OCT) which is a non-invasive imaging test. He said the OCT Scan also plays a great role in predicting heart attacks.