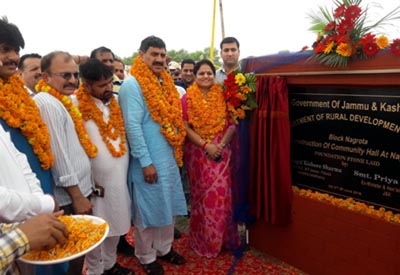 Excelsior Correspondent
JAMMU, June 9: Member Parliament (MP) Jugal Kishore Sharma and MLA Priya Sethi today said that rural development is priority of both Central as well as J&K Government and going by the principle of Prime Minister Narendra Modi “Sabka Saath Sabka Vikas”, adequate facilities are being provided to people in every village and town.
The MP and the MLA were speaking while laying foundation stone of a community hall at Nagrota which will be constructed at any estimated cost of Rs 50 lakh and developed by department of Rural Development Department. This was a long pending demand of people of Nagrota who had been looking for such a facility for the last several years.
Priya Sethi also sanctioned funds from her Constituency Development Fund (CDF) to ensure that the community hall is completed at an earliest.  “The facility once developed is going to benefit about 20,000 people of about 13 Panchayats who otherwise had no option to hold social gatherings in the area. The space is going to have state of the art facilities, rooms and even parking besides adequate water and electricity”, Priya Sethi said while addressing the gathering.
Speaking on the occasion, Jugal Kishore said that ultimate aim of development is to ensure that its benefits reach to each and every individual. He added that several schemes meant for rural areas have been started to uplift socio-economic condition of people.
Priya Sethi further said,” irrespective of caste, creed, religion or region the development has to go and that’s the objective of both State as well as Central Government”. She said that both the State as well as Central Government has launched women specific schemes which are helping women folk in setting up their individual units, start new ventures, etc.