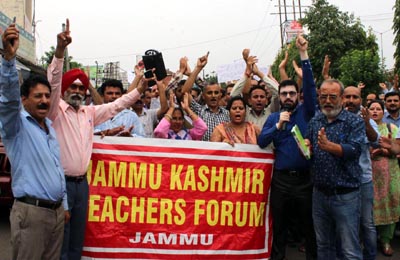 Excelsior Correspondent
JAMMU, June 9: Under the banner of Jammu and Kashmir Teachers Forum, protest demonstrations were held against alleged callous attitude of the State Government towards the genuine grievances of the teachers under SSA and RMSA schemes.
Main protest demonstration was held near  Press Club Jammu. The protesting teachers  were holding the placards highlighting the plights of ReTs, RReTs  and  Head Teachers  who are working under SSA, RMSA schemes and are at the verge of starvation due to  misinterpretation of these schemes leading to wrong implementation resulting into the  unnecessary harassment and mental trauma for no fault of their.
Addressing the gathering, the speakers lambasted the alleged callous approach of the  State Government in mitigating the demands of teaching community, particularly of those working under SSA & RMSA scheme. They warned the State Government to desist from delaying tactics and immediately de-link the salaries from Central budget to State budget for streamlining the same.
Click here to watch video
Also demanding benefit of 7th Pay Commission to these ReTs and RReTs, the speakers  appealed the Chief Minister Mehbooba Mufti to intervene personally to resolve all the pending issues.
Later, a memorandum containing the demand of delinking of salaries of teachers working under SSA and RMSA from Central funding was submitted to the Chief Minister through Deputy Commissioner Jammu.
Those who addressed the protest demonstration, included Yog Raj Singh Slathia, Gopal Singh, Soorat Singh Toofani, Rajinder Gupta, Mohd  Iqwal, Ravinder Singh, Darshan  Sharma, Kuldeep Singh Bandral, Susheel Sharma. Subhash Singh Yashpaul, Narinder Chib and others.
Similar protest demonstrations were held at district headquarters. At Samba, the protest demonstration by J&K Teachers Forum was held under the leadership of district president Rajeshwar Singh.