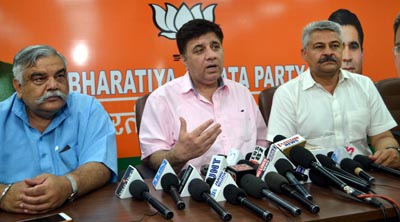 Excelsior Correspondent
JAMMU, June 9: Terming that notion carried by a section of people that youth in the State were drawn to militancy during recent past due to alleged excesses committed by security forces as totally wrong, State BJP today said though the security forces did not conduct operations during fasting month of Ramzan still some youth were lured to terrorist ranks in Kashmir valley.
Talking to reporters here today BJP State spokesperson, Brig (retd) Anil Gupta along with Party chief spokesperson Sunil Sethi and spokesperson, Arun Gupta said “the purpose of the Government behind the (Ramzan) ceasefire was to normalize the situation in the Kashmir valley but it has now proved beyond any doubt that the youth are not joining militancy because of the excesses of security forces.
Click here to watch video
“There can be other causes for that as security forces did not conduct any operation (since the beginning of Ramzan last month) but still some youth joined the terror ranks, Brig Gupta said. We need to look for reasons why the youth are joining militancy and the civil society of Kashmir had a greater role to play and look why the youth are deviating from the right path,” he added.
Chief spokesperson, Sunil Sethi and spokesperson Arun Kumar Gupta while talking to reporters terming the welfare measures announced by Union Home Minister, Rajnath Singh as historic said “it will help to create a new atmosphere as the people especially the border residents would feel the sense of belonging”.
Sethi said Home Minister has already made it clear that a decision to extend the ceasefire would be taken after a review meeting but added “as far as we are concerned, we feel the outcome of the ceasefire demands its immediate relook.”
On separatist Hurriyat Conference, Brig Gupta said they are acting like “agents” of Pakistan and they only want to maintain their power while working for Pakistan.
“Nobody ever thought of West Pakistani Refugees for the last 70 years. This is a big and historic announcement and reflects the sincerity of BJP Government,” Sethi said.
He said the historic decisions, announced by Singh, would lead to a creation of a new atmosphere in the State. “The people especially the border residents will feel the sense of belonging.  They are now feeling that the Centre is with them and taking measures which are beyond one’s thinking.”
On amnesty to stone-pelters in Kashmir, he said it is an attempt to normalize the situation in Kashmir.
About over 230 cases pertaining to Amarnath land row agitation of 2008, he said BJP is making efforts in this regard as well.
“Thousands of people have taken part in the agitation and many innocents were also booked. We will like the Government to take back those cases as well and talks will be held with the Government,” he said.
Sethi advocated compensation to Pakistan-occupied Kashmir (PoK) refugees who have settled outside the State after migrating from across the border and said “only PoK refugees settled in the State are liable to the compensation announced by the Centre.
“There is a petition pending in Supreme Court with regard to Article 35A, dealing with special state subject rights. “The matter is subjudice”.
Gupta said BJP has fulfilled all its promises with the border residents. “The five marlas of land at safer places was promised by National Conference, he added.