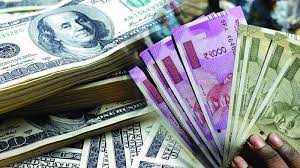 Mumbai, Jan 21: The rupee advanced by 8 paise to close at 74.43 (provisional) against the US dollar on Friday on the back of easing crude oil prices and dollar selling by banks and exporters.
However, the rupee’s further recovery was restricted by continuous foreign fund outflows and sell-offs in domestic equities, analysts said.
At the interbank foreign exchange market, the rupee opened at 74.50 a dollar and during the day, it witnessed an intra-day high of 74.40 and a low of 74.55 against the American currency.
The domestic unit finally settled at 74.43 (provisional) against the American currency, up 8 paise over its last close of 74.51.
Meanwhile, the US dollar index, which measures the greenback’s strength against the basket of six currencies, fell 0.13 per cent to 95.61.
“The Indian rupee appreciated on back of fall in crude oil prices, corporate dollar inflows along with exporters dollar selling and debt raising helped the rupee in trimming weekly losses,” said Dilip Parmar, Research Analyst, HDFC Securities.
During this week, the local currency has depreciated 28 paise against the US dollar.
On a weekly basis, spot USDINR marked the first loss in the last five weeks on the back of a surge in virus cases, higher crude oil prices and policy divergence between US Federal Reserves and Indian RBI, Parmar said.
In the coming days, price action of USDINR will be determined by Crude oil prices, Federal Open Market Committee (FOMC) meeting outcome, risk sentiments and dollar inflows, he added.
Brent crude futures, the global oil benchmark, fell 1.95 per cent to USD 86.66 per barrel.
On the domestic equity market front, the BSE Sensex ended 427.44 points or 0.72 per cent lower at 59,037.18, while the broader NSE Nifty declined 139.85 points or 0.79 per cent to 17,617.15. PTI DRR
Foreign institutional investors were net sellers in the capital market on Thursday, as they offloaded shares worth Rs 4,679.84 crore, as per stock exchange data. (AGENCIES)
&&&
BIZ-STOCKS-CLOSE
Sensex tumbles 427 pts; Nifty retains 17,600
Mumbai, Jan 21:
Extending its losses for the fourth straight session, equity benchmark Sensex slumped 427 points on Friday, tracking weakness in Bajaj Finserv, L&T and Infosys amid a widespread sell-off in global markets.
Relentless foreign fund outflows further weighed on the bourses, traders said.
The 30-share BSE index ended 427.44 points or 0.72 per cent lower at 59,037.18. Similarly, the NSE Nifty plunged 139.85 points or 0.79 per cent to 17,617.15.
Fag-end buying in some select blue-chip counters helped the bourses limit the losses.
Bajaj Finserv was the top laggard in the Sensex pack, shedding 5.37 per cent, followed by Tech Mahindra, Tata Steel, Bharti Airtel, L&T, IndusInd Bank, Bajaj Finance and Infosys.
On the other hand, HUL, Maruti, HDFC twins, and TCS were among the gainers, rising up to 2.68 per cent.
In other Asian markets, bourses in Hong Kong, Seoul, Shanghai and Tokyo closed in the red.
Stock exchanges in Europe were trading with deep losses in mid-session deals.
International oil benchmark Brent crude tumbled 1.92 per cent to USD 86.68 per barrel.
Foreign institutional investors (FIIs) were net sellers in the capital market, as they sold shares worth Rs 4,679.84 crore on Thursday, according to stock exchange data. (AGENCIES)
&&