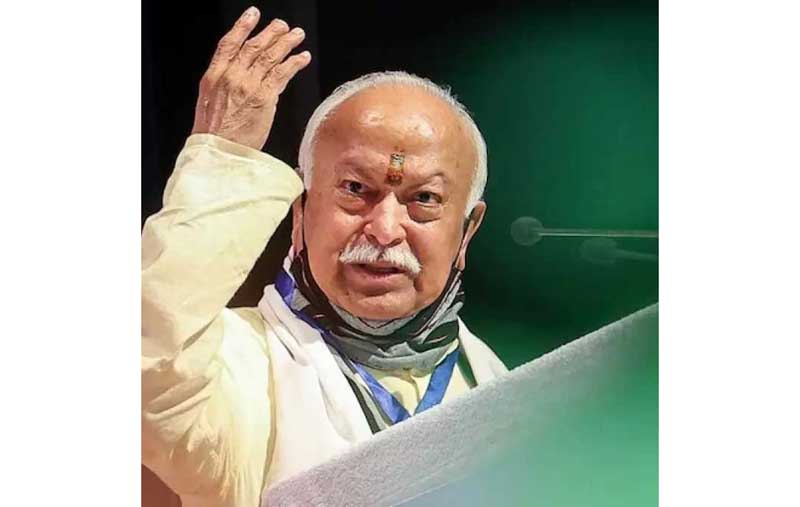 JABALPUR, Nov 18:
Rashtriya Swayamsevak Sangh (RSS) chief Mohan Bhagwat on Friday began his interaction with functionaries from the Mahakaushal region here, with a focus on reaching out to each and every household in the country and aiming to double the Sangh’s base by 2025 when it celebrates its centenary year.
The Sangh also aspires to bolster its swadeshi goods campaign to discourage the use of foreign goods by making inroads into homes, a Sangh functionary said.
“Param Pujaniya Sarsanghchalak Dr Shri Mohan ji Bhagwat started his interaction with the sangh functionaries in groups at Keshav Kutti — the RSS divisional office here, ” the functionary said.
Bhagwat reached Jabalpur for a four-day visit on Thursday. The visit is significant, as only two years are left for the RSS’s centenary year celebrations.
The organisation plans to celebrate the centenary in a grand way, the Sangh’s Mahakaushal Prant Sahaprachar Pramukh Prashant Bajpai said.
“On Saturday, Bhagwat will speak on the role of the society in nation-building, village development, agriculture and labourers’ welfare, environment and participation of women in walks of life,” Bajpai said. On Sunday, Bhagwat will meet the family members of RSS swayamsevaks (volunteers) and speak on the role of family in the country’s development, he added.
As per an estimate, the RSS has around 3,000 pracharaks (full-time workers) in different wings of the organisation’s offshoots in sectors like defence, education, labour unions and in tribal areas.
According to RSS insiders, the Sangh aims to double its organisational strength by roping in part-time volunteers or vistaraks and expanding its footprint ahead of its centenary year.
Bhagwat is in Madhya Pradesh after paying a four-day visit to adjoining Chhattisgarh. (PTI)