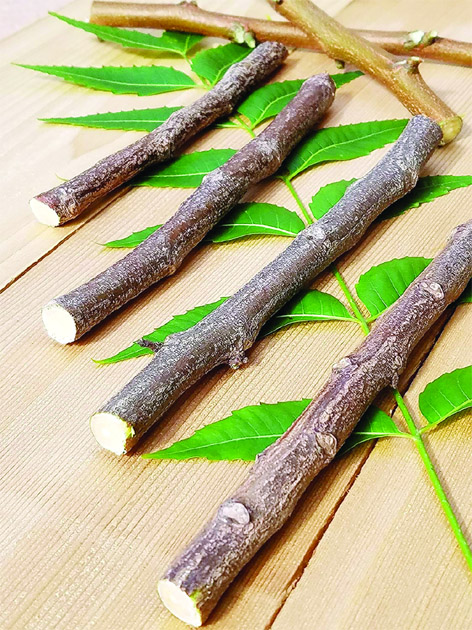 Dr C.M.Seth
When we were young, we would run in the morning to adjoining forest area or nearby farm with axe or Darat to cut a twig from Kikar or Farlai plant, remove all thorns, cut into six inches twigs and use as tooth brush. In Jammu there was a practice to sell these Datuns in the market. Slowly and slowly these Datuns disappeared from the market and also practice of cleaning teeth with these Datuns disappeared in cities and villages. This practice of cleaning teeth with natural Datuns obtained from tree species had all the medicinal properties which helped in creating an ecosystem in the mouth to daily fight the effect of bacterial and viral microorganisms in the body. These Datuns also helped in improving the immune system of body besides treating tooth aches and gum infection.
India is rich in medicinal plant biodiversity. Our ancient Sages and Rishis had their Ashrams located inside forest areas. In these Ashrams they were dependent on plants growing in these forests to find out solutions for the treatment of various diseases, they were suffering. These Rishis documented all the knowledge and practices in the books and scriptures. Some of the ancient Rishis who developed the science and practice of Ayurveda are Ashwin, Bhardwaja, Dhanvantri, Jivaka, Sushruta, Charaka. Nagaarjuna, Vaghbata and Madhva. These sciences were lateron developed in Taxela and Nalanda Universities. Our Vedas describe these practices for healthy life. Alongwith indigenous Ayurveda, other systems also developed based on local flora like Unani, Amchi and Homeopathy. Ayurvedic and Unani pharmacopoeia mention these plant species. Now all these indigenous system are clubbed into AYUSH system of India. Some of these practices are prehistoric.
To fight pandemic of Corona Virus, COVID-19 in human beings, Ministry of AYUSH Government of India in the month of March, 2020, issued guidelines for preventive and symptomatic cure of infection with the use of medicinal herbs like Gloe, Tulsi, Amla, Baidana, Anab, Ginger, Lowang, Lasooda and Haldi. All these herbs are part of our daily life and are being used in our kitchens since centuries. These herbs help in improving immune system of body to fight the infection. Some of such traditional practices we have forgotten which helped us to improve our immune system to fight any viral or bacterial infections. Such traditional practices need to be revived. One of this traditional practice was use of Datun from different plants for mouth hygiene and teeth cleaning.
Earliest records of chewing sticks or Datun have been recorded from Egyptian Pyramids about 3000 years. Use of chewing sticks have also been recorded from Babylonia about 3500 years ago. In China use of Datun is recorded about 1600 BC. In India its use have been recorded in the times of Ramayana and Mahabharata. Even its use has been recorded in Harappa Mohenjo-Daro civilizations. The plants which were in use for Datun were available near the villages in the agriculture farms and adjoining forests. All these species which were used had tannins. Tannins are astringent and antibacterial. These tannins help in treatment of gum diseases and control of tooth decay. After the use of tooth paste and tooth brush, use of Datun almost reduced considerably. There are many species in plant kingdom which can be used as Datuns like Neem, Babul, Farlai, Sisoo, Brankad, Kadi Patta, Jamun, Amrood, Eucalyptus, Timru, Bana, Walnut, Willows, Mulbery, Harad and Behra.
Neem ( Azadirachta indica) is imunomodulatory, antinflamotry, antiulcer, antimalarial, antifungal, antibacterial, antiviral, antioxidant and anticarcenogenic. Babul (Acaccia Arabica) is good for treatment of dry skin like itching and flakiness. It is anti-inflammatory, antiseptic, antifungal and antibacterial. It can help in reducing tooth ache, strengthening of gums, reduce plaque and inflammation. Farlai (Acaccia nelotica) species has therapeutic uses like antimicrobial, antiplasmodial, antioxidant. Used for treatment of human immunodeficiency virus, Hepatitis C virus and cancer. Sisoo or Tali (Delbergia sissoo) species has anthelmintic, antipyretic, aphrodisiac, expectorant and refrigerant properties. It is antimicrobial and antiviral. Brankad (Adhatoda vasica) species has antibacterial, antimicrobial, antiviral, anti-inflammatory and antihemorrhagic properties. Species is also used in expectorants. Kadi Patta ( Murraya koenigii) species has therapeutic potential. Used for treatment of night blindness, vomiting, bites of poisonous animals, Dysentery, Diarrhoea. It is antiviral and antimicrobial. Used for dental care. Jammun (Syzygium cuminii) species is used for treatment of diabetes mellitus, inflammation, ulcers, diarrhoea, liver diseases and cancer. Good for tooth ache and gums. Bana ( Vitex negundo) species is commonly used in rural areas by local traditional practitioners for Phanda. Also used in Unani system. It is anti-inflammatory, expectorant, tranquilizer, antispasmodic, antifungal land antipyretic. Timuru (Zanthoxylum armatum) is also called as Tooth Tree. Species is good for treatment of asthama, bronchitis, varicose veins and diarrhoea. It is antibacterial with other pharmacological properties. Used to cure pain in gums, gum bleeding, mouth freshener, tooth ache, cure cold and cough. Used for cure of pneumonia. Walnut or Akhrot ( Juglans regia) is also called Roungali Datun or Dandasa. In all hilly areas leaves, bark and twigs of walnut plant are used as Datun, particularly ladies because of red colour of tannin. Species has antioxidant properties because of Omega 3. It is also used for treatment of Diabetes, Blood Pressure. It is antimicrobial. There are several other species like Eucalyptus, Amrood, Harad, Behra, Willows and Mulbery used as Datun. These days we have Neem tooth paste, Babool tooth paste, Meswak tooth paste and herbal tooth paste.
For good health of teeth and gums, I would like to recommend that we should revive the old practice of using twigs of these trees as Datun, atleast once a week. All these species are antibacterial and antiviral also, they can help in fighting various microorganisms and also to improve the immunity of body and control respiratory problems due to infections.
(The author is former Chairman Pollution Control Board J&K)