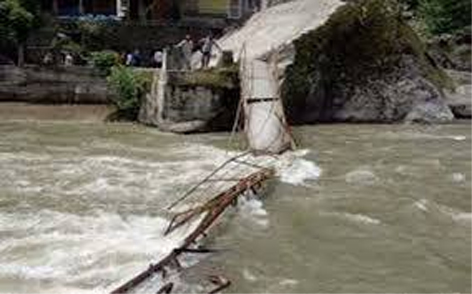 A 60 year old wooden bridge on Tawi river in Block Chenani has been more than a companion of and helper to the residents of the area . It not only connects them between the villages and areas on both sides but vegetables grown in good quantity are readily transported out from the area for marketing because of this bridge. A tipper proved nothing less than a villain which first got stuck itself on it and then extensively damaged a portion of this bridge .
People are now unable to use this dilapidated ‘grand old’ bridge and want Department of Roads and Buildings to conduct its repairs. Since some delay has already taken place and people of the area are experiencing difficulties, they even held demonstrations and protests for ignoring their pleas. As the bridge is the only link between Chenani to Pattangarh and other areas and thousands of people are directly and indirectly connected with this bridge, the authorities must look into the matter and resolve it at the earliest by suitably arranging its repairs.