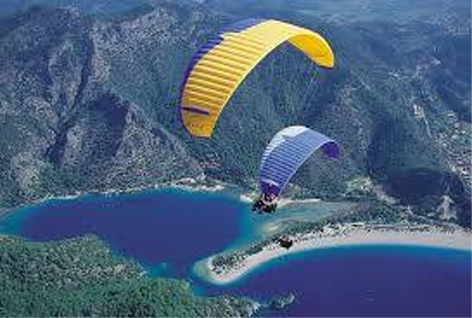 Presently, while almost discussing about any subject in everyday life , COVID 19 pandemic somehow creeps into, and why should it not, as it has attained unparalleled global notoriety since it has badly disturbed all equations in the life of human beings and even that which sustains it. There are two theories about looking at the dreaded virus – one that we must learn to live with it denoting its arrival perhaps on the condition that it had ”somehow” obtained a long lease to stay. Well, that looks horrific but what to do unless an antidote was made. The second theory is that of sheer optimism and living by hope and that is we shall defeat it and revert to our normal positions – no masks, no physical distancing , no scare to go by rail or air, no repeated hand washing and sprinkling sanitizers and more so, no bar on visiting friends and relatives and getting visited in turn . Amidst all the present scenario, if something was thought about the thrilling paragliding in Jammu ,that was not something less than extraordinary , at least during being ”air borne” we could live without masks and convert the perpetual gloom and concern, on account of watching on TV screens and getting to know from the media about the unfortunate daily ascending ”score” of the virus , into adventure and hilarity. Since paragliding was in itself an adventurist sports , it had the potential of becoming one of the top choices of adventure tourism giving ample opportunities of exploring it to various advantages for the people in various ways.
Just slightly over four months of lock down phases and now present ‘unlocking phases’ have proved as if decades of “embargo” having been undergone and experienced on freely moving out , in parks, fields , in the open on streets , swimming pools, golf grounds etc and since some sort of unique adventure of the feeling of flying like a bird is a good proposition , why not it to be given a serious thought. The sport of paragliding is really amusing and could be of increasing interest and amusement both for the participants or ”sportspersons” and those who watch the slow and thrilling flight. Environs in Jammu are suitable and conducive for this sport . We have been seeing it on TV screens live and thus having got broader idea and even a feel of how it works , the pivot of which is a parachute of special design for it.
However, a bit of preliminaries are required to be gone through , some initial training which is required not only for becoming a paragliding ‘pilot’ but to ward off associated fear and scare of going up and high towards the blue sky for which going along a trained pilot as a tandem ‘passenger’ was a prerequisite. Nothing is possible unless some quantum of investment in terms of money, efforts, infrastructure , publicity , limelight and exposure etc was made. Altitude ranges and takeoff platforms shall have to be identified and connectivity by roads to reach those points from where paragliding sports would be “played” was to be provided by the UT Government and also providing all basic and ancillary facilities so that adventure tourism could get some added new shape and form .
However, without critical analysis, the subject could not be thought of having been put in a balanced form and due consideration would be required for many factors like training , associated infrastructure , equipment and parachutes , trainers and experienced ‘pilots’ and a bit of monetary investment. However, gradual implementation of the process of starting paragliding could be initiated in right earnest and identifying and developing paragliding sites in Jammu region could be among the first steps in that direction.