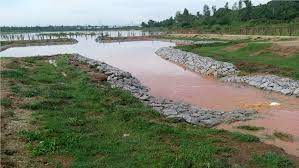 Water and its uninterrupted supply both for consumption as well as for most of the agricultural needs while being under severe constraints , however, needs to be conserved, preserved and avenues found to rejuvenate its main natural sources. We see that the world at large is confronted with the energy crisis in as much as with shortage of or presence of low quality water. Even between various neighbouring states in our country, water is very often of such a serious connotation that it not only becomes a political and a hot poll issue but very often Tribunals and courts have to intervene despite various awards and reports of different commissions advising the basis and the manner of sharing river water between the neighbouring states. Besides, whether it is the question of economic development or social development rather for that matter, even political stability , ”managing” water is of paramount importance. Having said so, the Union Government having already taken a decision to go in for major rejuvenation process of Indian rivers would resolve many associated problems that currently these rivers are reeling under. Erosion of landscape and at the same time lowering of base levels are ailing most of our rivers. We fairly know and often lament about the fact that there are many problems in respect of almost all rivers in the country mainly due to increased pressure on them coupled with haphazard human intervention and ruthless violations like wanton mining etc as also natural causes that the rejuvenation issue crops up. In this connection, Indian Council of Forestry , Research and Education (ICFRE) which is under the Ministry of Environment and Forests is mandated to conduct forestry research and develop technologies in respect of the natural ecosystem and transfer the same to the concerned states and UTs in the country , rivers as such being part of the process of taking advantage of such technologies and solutions needs to be fully availed of . In that context , to further the process of rejuvenation of 13 rivers in the country including the three in Jammu and Kashmir namely Chenab, Jehlum and Ravi , the ICFE has duly prepared the Detailed Project Reports (DPRs) hence deemed to be all feasible technically . It is a major development in respect of riddance of these rivers from various looming threatening factors and nearly 81 kilometres length of Jehlum , 91 that of Chenab and 89 square kilometres of River Ravi are expected to be covered under the Rejuvenation initiative at the instance of the Union Ministry of Environment , Forest and Climate Change which has now released the said DPRs heralding the process of infusing life and freshness in these rivers. It has to be borne in mind that the entire process of rejuvenation is a time taking process and may take nearly a period of five years focussing among other vital issues on the conservation which is vital for our potable water schemes currently in operation . Once adequate supply of water and comparatively of better quality was possible on account of the proposed process, that would vastly improve supply positions as well. Since these DPRs are scheduled to be shared with the respective states /UTs and the funds support having already been finalised what we are to witness now hopefully is, implementation process taking place at an early date. Now, not only the UT Forest Department but many other departments believed to be stakeholders in the process like Agriculture and Horticulture Department, Urban Municipal Bodies, Rural Development Department and other agencies are to work in tandem in a spirit of active participation. It is imperative , therefore, that proper strategies and targets are distributed among these departments with proper responsibilities. Needless to add, Jammu and Kashmir is blessed by nature with adequate water resources while the demand for water is increasingly showing upward trends as mass urbanisation taking place is a routine process of development. If we are serious about conserving water , it would be really a self rewarding process for our own survival. Rivers are lifeline of people looking to extremely important role in our lives played by the rivers say irrigation, potable water, providing livelihood and employment to innumerable people besides playing a unique role in water cycle , acting drainage channels for surface water besides providing excellent habitat. River Jehlum popularly known as Veth in Kashmir, provides roof to thousands of people on its waters touching both of its banks from times immemorial .Therefore, rivers are sacrosanct and need our constant care