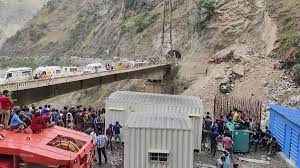 The fear of one or the other risk regarding safety of the workers/ technicians/ engineers etc always looming large during the process of construction especially of projects of critical and challenging nature cannot be ruled out or underestimated. In common parlance , therefore, what is required is making foolproof arrangements of safety measures that minimise , if not eliminate altogether , mishaps, minor or major. And at the outset, if prima facia there is some breach in safety measures in the process of construction of a project , that constitutes wilful negligence and , therefore, must be accounted for. However, generally we talk of personal protective equipment and lay much emphasis on that factor so that any falling object from a height may not harm the personnel engaged in the construction activities which are multifarious but who had envisaged a catastrophe like the one that struck the under -construction tunnel at Magarkote in Ramban , a portion of which caved in and collapsed trapping a dozen of workers under its debris . The latest information, however, given by the NHAI is that there is no tunnel collapse as such but a slide occurred on the mouth of the audit tunnel . Unfortunate , however, none of the trapped could be retrieved alive. Unfavourable weather conditions unfortunately precipitated the rescue operations.
Although ”rescue’ operations which lasted for nearly 45 hours are now declared to be over , retrieving the trapped possibilities of survivors had became remote on account of the time factor , the inevitable, therefore, has happened and resulted in casualties. Quite unfortunate as it looks , the entire issue , besides on technical grounds , needs to be thoroughly gone through to arrive at the definite conclusion as to the causes of a portion of the high profile project collapsing . However, a few points need to be clarified in this regard to serve as a future guidance for aversion of such accidents and for making more in-depth and professional inquiries about the nature and behaviour of the soil, rocks and other local and geographical factors which had the potentiality to affect the safety and security of projects as under reference , that is in simple language – making a straight long hole into a mountain or to make a tunnel for making way for smooth and fast as also hassles free movement of traffic to economise on time and cost of travel on the strategically important Jammu -Srinagar National Highway.
Why were the labourers /workers working in the night on the construction site as the timing of collapsing of the portion of the tunnel is believed to be between 10.15 to 10.40 pm ? Why was not the factor of the night and associated limitations of movement and seeking any help, assistance or attending to an emergency during those hours anticipated ? In other words, the fallout of any tragedy or accident unfortunately taking place during daytime can be arranged to be minimised as rescue and evacuation operations can be handled swiftly. Why was the work on the tunnel going on when the weather conditions were those of rains and strong winds since the entire area is known for landslides, falling rock boulders and shooting stones? This area and quite adjacent points on the NH notoriously has been known as ”Khooni Nallah” because of frequent accidents in the past taking place there because of the unreliability and susceptibility in respect of when and how a landslide would wash away a vehicle on the NH down in the river.
The most troublesome and virtually ”untreatable” Ramban -Khooni Nallah area to be made free of the vagaries of hazards and to ensure smooth traffic movement during rainy season is only by means of burrowing a tunnel as the one under construction is but suddenly a portion giving in must be baffling the engineers and petrologists equally who must undertake deep study of the causes whether the unspecified characteristics of the mountainous area there had got something to do with the mishap which perhaps were not taken into account earlier. Equally, it is to be ensured whether there was any error committed in interpreting the design or compromising with the quality standards. The possibility of sabotage too cannot be ruled out.
Since the debris near the mouth of the tunnel is cleared and a total of 10 lives having perished in the mishap, most of the thrust should now be on ruling out any sort of such mishap anywhere in future in respect of the tunnel for which inspection and safety audit by high professionals and experts of considerable exposure must be conducted. No chances whatsoever must be taken in that as the proverbial once bitten twice shy warrants to be extremely careful. The police, UT and National Disaster response forces, the Army personnel, district administration as also the project executing agency despite unfavourable weather conditions have done commendable job all the tense 45 hours of rescue operations, it is another thing that none of the trapped in the debris could not be pulled out alive.