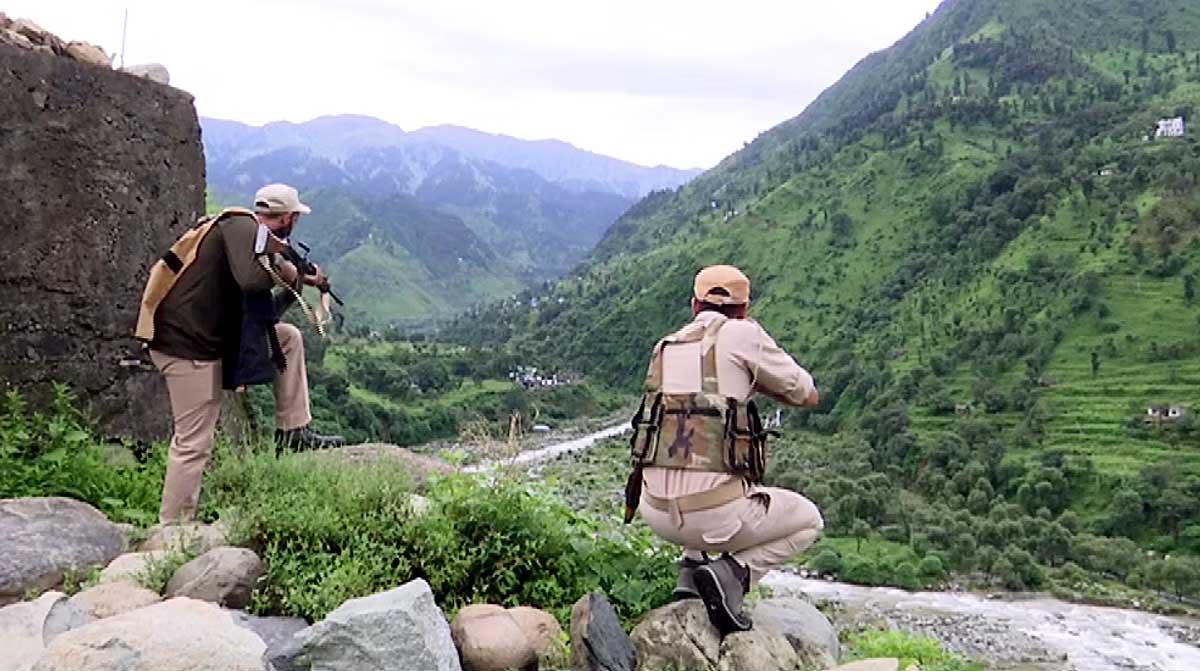 Irrespective of its pitiable domestic conditions, both economic as well as political , Pakistan manages to keep its agenda of sustaining of creating disturbances in Jammu and Kashmir through its armed men who somehow succeed in crossing the border to reaching the targets fixed by their mentors . Close on the heels of celebrations of our independence day , two suicide bombers from across the border managed to sneak in reaching at the gates of an Army camp at Paragal in Rajouri district nearly 185 kms far from Jammu on the wee hours of Thursday this week but before they could repeat another Uri type operation they were prevented from gaining entry into the Army camp . Both of these suicide bombers were eliminated but not without unfortunately losing four of our brave hearts besides two officers getting injuries in the shootout that lasted for a few hours. After meeting their destined end , heavy arms and ammunition were recovered from their possession indicating of the satanic design and the plan to stretch the duration of attack on the camp and possibly cause maximum damage but the design of the two slain terrorists and their mentors were dashed to ground by our valiant forces.
It may be recalled that an attack on similar lines was carried out quite in the wee hours by four terrorists in September 2016 by managing to cross over the Line of Control (LoC) from the PoK in which 19 of our soldiers attained martyrdom while all the four terrorists from the Jaish-e-Mohammed terrorist outfit were eliminated. India did not take such a cowardly terror attack managed and sponsored by forces from across the border casually and avenged the same by launching surgical strikes against terrorists camps in deep Pakistan occupied Kashmir on Sept 28 in 2016 itself and since then the Government has been observing Sept 20 as ”Surgical Strikes Day”. Like in Uri when the Pakistani armed intruders sneaked in and reached the army camp, it was the time in early morning when most of the soldiers were asleep , in the same way the strategy about the attack on Rajouri being choosing of the time – around as early as 2 am was planned to make it another Uri. The evil designs and the nefarious objectives , however, got totally defeated and the attack was repulsed.
However, certain points are relevant to be taken note of. The ”return ”of suicide bombers has been thus witnessed after the last one in February 2019 in Lethpora, Pulwama where 40 of our unarmed CRPF personnel travelling in buses attained martyrdom on account of a suicide bomber attack. The element of surprise and striking amidst an environ of a comparative complacency which sets in as days pass in respect of an attack on our army camps or on other installations in the recent past can well be seen. The terrorists take advantage of this natural phenomenon which , therefore, calls for heightened surveillance , watch and exercising absolute vigil . It is believed that the terrorists were spotted a day or two earlier also but why they could not be nabbed before causing loss of our four brave hearts?
It is also to be noted that as a camouflaging process, these terrorists are usually moving in combat dresses till their evil designs succeed in reaching the environs of the ”chosen target”. It is also to be noted for stitching proper strategies that apparently these intruders either use vast Pir Panjal Range which has a connect with Pakistan occupied Kashmir or they somehow manage to cross the LoC to cross over to this side. Why could these terrorists succeed in carrying out second attack in the district within a span of less than four months of a similar nature attack on the eve of the visit of the country’s Prime Minister to a village in Samba , needs investigations and assessments of our plans to deal more ruthlessly with these mercenaries of Pakistan.
While we cannot specifically opine on matters related to defence as no stone seems to be left unturned by our Army personnel /authorities in ensuring that such cowardly attacks never succeeded , however, we would suggest that each army camp be made with nil vulnerability to any type of breaches to help the militants reach nearer and strike at ease . Since their mission is blowing themselves to pieces as human bombers , therefore, they are ruthless in getting their devilish and wicked plans executed. Every incident of this nature leaves a trail of scope for assessing our levels of preparedness , our security fortification and our prospective strategies to be employed in such incidents, therefore, let the attack of this nature be the last one to succeed in harming our Army personnel.