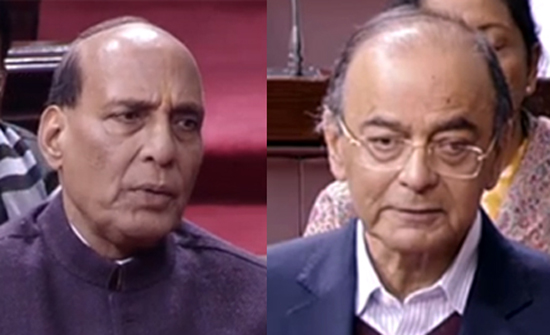 Sanjeev Pargal
JAMMU, Jan 3: Union Home Minister Rajnath Singh today announced in the Rajya Sabha that the Central Government will have no objections to hold Assembly elections in Jammu and Kashmir simultaneously with Lok Sabha polls if the Election Commission desired and it will extend full assistance (to the Commission) like additional para-military forces even as he strongly defended Governor Satya Pal Malik saying he hasn’t carried out any “wrong amendment’’ in the legislations during the Governor’s rule saying one of the amendments in the Panchayati Raj Act increasing financial powers of the Panchayats 10 times, has become a role model for other States of the country.
Rajnath was replying to debate on Statutory Resolution to impose President’s rule in Jammu and Kashmir in the Rajya Sabha. The Resolution was unanimously adopted by the House.
Union Finance Minister, Arun Jaitley, who intervened in the debate, launched a frontal attack on the Congress saying it were the Congress policies right since 1950, which were responsible for alienation in Kashmir and not four and half years rule of the BJP-led NDA Government, as claimed by Leader of Opposition in Rajya Sabha, Ghulam Nabi Azad, a former Chief Minister of Jammu and Kashmir.