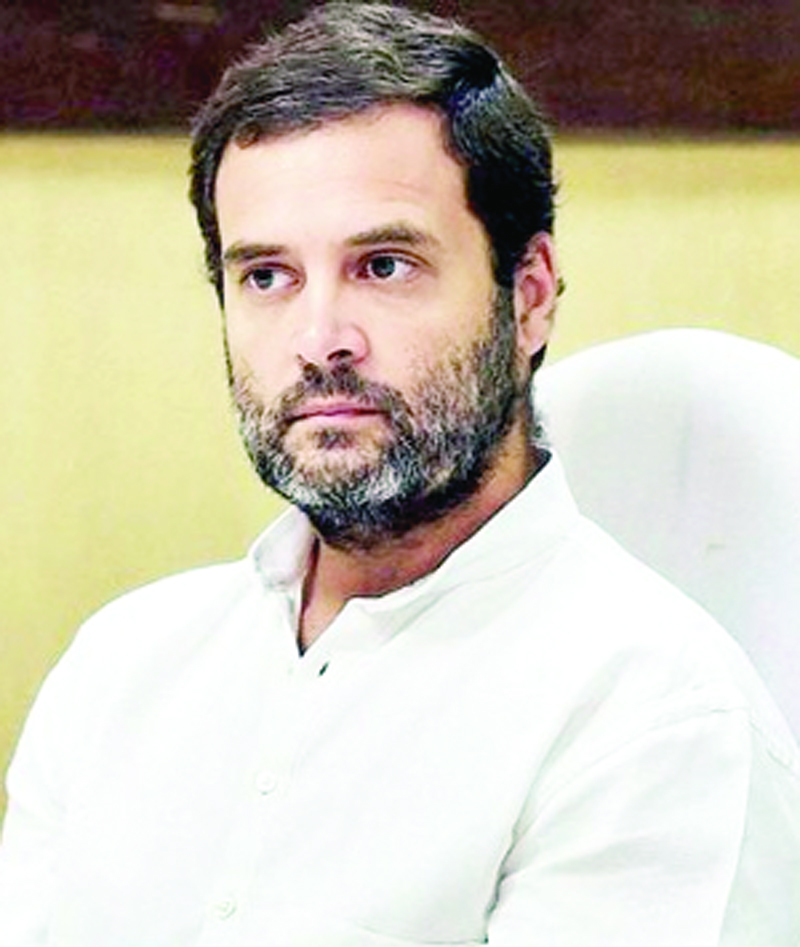 NEW DELHI, July 3: In more trouble for the crisis-hit Congress, Rahul Gandhi today publicly announced his resignation as its president, taking responsibility for the Lok Sabha polls debacle, and called for “hard decisions” to rebuild the party and making people accountable for the “failure” of 2019.
In a four-page open letter, Gandhi also urged the Congress Working Committee (CWC) to entrust a group of people with the task of finding a new president as it would not be proper for him to do so. Click here to watch video
The 49-year-old leader —who has been adamant on his decision to quit as party president since May 25, two days after the results in which his party won 52 seats — also stressed on the need for the Congress to “radically transform itself”.
In a letter that was emotive in places and combative in others, he said he owed the country and his party a debt of tremendous gratitude and love, but maintained that at times he stood “completely alone” in his fight against the Prime Minister and the RSS.
“As president of the Congress Party, I am responsible for the loss of the 2019 election. Accountability is critical for the future growth of our party. It is for this reason that I have resigned as Congress President,” he said, rejecting pleas by senior party leaders to continue as the chief of the grand old party.
“Rebuilding the party requires hard decisions and numerous people will have to be made accountable for the failure of 2019. It would be unjust to hold others accountable but ignore my own responsibility as President of the party,” he said in the letter posted on the Twitter.
In his Twitter account, Gandhi’s designation as “president” of Congress was also changed to “Member of Congress and Member of Parliament”.
Today’s public announcement by Gandhi, putting an end to ‘will he or will he not’, is seen by many political commentators as yet another blow to the crisis-ridden Congress, which is caught in a phase of uncertainty over the issue of leadership.
Rahul succeeded his mother Sonia Gandhi as Congress president in December 2017 and his major success at the helm of the 133 year old party was winning the three state elections in Rajasthan, Chhattisgarh and Madhya Pradesh in December last year.
Congress sources said Gandhi continues to be party president till his resignation is accepted by the CWC and a new chief is appointed after due process. They also said a meeting of the CWC will be convened soon which will decide on future course of action.
The names of veteran party leaders Sushil Kumar Shinde, Mallikarjun Kharge and Ashok Gehlot are among the probables doing rounds for the position. However, there is no official confirmation about it.
Heralding what could be a new era in his party, Gandhi said it had been a honour to serve the Congress, whose values and ideals have served as the lifeblood of “this beautiful nation”.
“I fought because I love India… At times I stood completely alone and am extremely proud of it,” he said.
“The stated objectives of the RSS, the capture of our country’s institutional structure, is now complete. Our democracy has been fundamentally weakened. There is a real danger that from now on, elections will go from being a determinant of India’s future to a mere ritual,” he said.
Gandhi said this capture of power will result in “unimaginable levels of violence and pain for India”, while alleging that the PM’s win does not negate the “breadth of corruption allegations against him”.
The Indian nation must unite to reclaim and resuscitate its institutions, Gandhi said. And the instrument of this resuscitation, he added, will be the Congress.
“To achieve this important task, the Congress Party must radically transform itself. Today the BJP is systematically crushing the voice of the Indian people. It is the duty of the Congress Party to defend these voices. India has never and will never be one voice. It is and always will be a symphony of voices. That is the true essence of Bharat Mata,” he said.
Reacting to the development, Union minister Mukhtar Abbas Naqvi called Gandhi’s announcement of his resignation on Twitter as a “brand new drama of the party while several of his BJP colleagues chose the occasion to highlight the difference between the two parties.
Gandhi, an MP from Wayanad who lost his Amethi seat, also claimed he did not fight a political party in the 2019 election but the entire machinery of the Indian state.
“It is now crystal clear that our once cherished institutional neutrality no longer exists in India,” he said.
Thanking the thousands of people who have written to him, Gandhi said in his letter that he would continue to fight for the ideals of the Congress with all his strength and will be available to the party whenever his services are required.
“It is a habit in India that the powerful cling to power, no one sacrifices power. But we will not defeat our opponents without sacrificing the desire for power and fighting a deeper ideological battle. I was born a Congressman, this party has always been with me and is my lifeblood and forever that way it shall remain,” Gandhi said.
He noted that a free and fair election requires the neutrality of a country’s institutions and an election cannot be fair without arbiters, a free press, an independent judiciary, and a transparent election commission that is objective and neutral. (PTI)