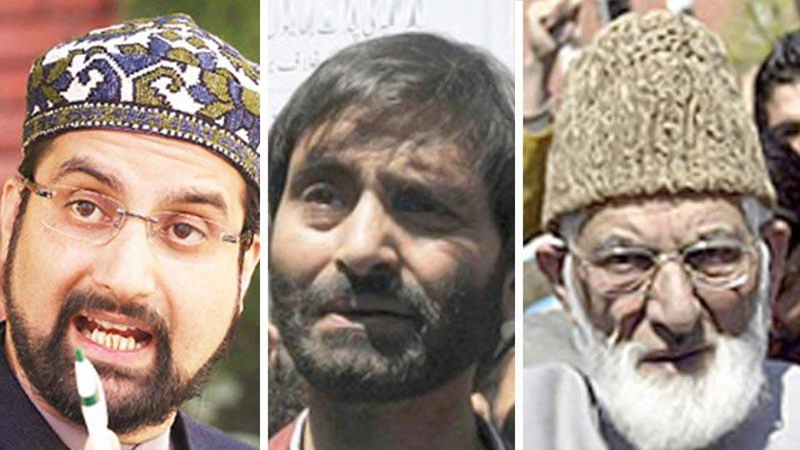 JAMMU, July 3: While the separatist leaders continued to mislead the Kashmiri youth prompting them to join militancy and stone pelting, the Union Ministry of Home Affairs (MHA) has come out with a list of 14 prominent separatist leaders, whose family members and relatives were doing jobs or pursuing education in foreign countries.
“Some of the family members including children of the separatists were well-settled in the foreign,” the MHA list accessed by the Excelsior revealed.
It said a total of 210 kin of 112 separatist leaders were settled in foreign, doing jobs or studying in well established institutions. Out of them, it has released names of 14 prominent separatists, whose kin were abroad even as the separatists continued to instigate the common Kashmiri youth to indulge in stone pelting or join militancy, thus, spoiling their career.
As per the MHA list, Khalid Ashraf and Aabid Ashraf, sons of separatist leader Ashraf Sehrai, were working in Saudi Arabia and were well settled there.
Mohammad bin Qasim and Ahmad bin Qasim, the two sons of Dukhtaran-e-Millat chief Asiya Andrabi are pursuing education in top ranking educational institutions in Malaysia and Australia respectively. Asiya continued to preach secessionism to the Valley youth whenever she is on the bail.
Two daughters of Altaf Ahmad Fantoosh, who happens to be the son-in-law of hardline Hurriyat Conference chairman, Syed Ali Shah Geelani and is affiliated with Tehreek-e-Hurriyat, are also abroad. One of them is doing MBBS in Pakistan and another is a journalist in Turkey.
Moderate Hurriyat Conference chairman Mirwaiz Umar Farooq’s sister is a doctor in United States of America.
Three children of People’s Conference leader Bilal Lone, who is also affiliated to Hurriyat Conference, are also well settled abroad. While one of his daughter and son-in-law are in London, another daughter is studying in Australia.
Son of former Jamaat-e-Islami Aamir, GM Bhat is a doctor in Saudi Arabia while son of Mohammad Shafi Reshi, who is a separatist affiliated with Democratic Political Movement, is doing PhD in United States of America.
Tehreek-e-Hurriyat leader Ashraf Laya’s daughter, Nawab, is doing MBBS in Sindh province of Pakistan while son of Zahoor Geelani, who is also affiliated with Tehreek-e-Hurriyat is settled in Saudi Arabia and is working in Saudi Airlines there.
Naeem Geelani son of Syed Ali Shah Geelani, chairman, hardline faction of All Parties Hurriyat Conference has also studied MBBS from Pakistan.
Daughters of Mohammad Yusuf Mir and Farooq Gatpuri, both separatists affiliated with Muslim League are also studying Medicines in Pakistan. Son of Khwaja Firdous Wani, the leader of Democratic Political Movement, too is doing MBBS in Pakistan.
Daughter and son of Nissar Hussain Rather, the separatist leader of Tehreek-e-Wahdat-e-Islami are well settled in Iran. His daughter is doing job in Iran.
While the Ministry of Home Affairs has come out with list of 14 separatists, whose 21 kin were either doing jobs or studying in foreign countries like US, Britain, Australia, Saudi Arabia, Iran, Turkey, Malaysia and Pakistan, it has reports that 310 family members and relatives of 112 separatists were doing jobs or studying abroad.
Source of funding of the studies of the separatists’ kin is also a major issue on which the Central Intelligence agencies were working as there were reports that funds received by the separatists from abroad to fuel unrest in the Kashmir valley have been used by them for studies of their children.
“The hawala money link is also not ruled out,” they said, adding that all aspects are being investigated.
They asserted that the list should serve an eye opener for the people of Kashmir, especially the youth, who were being misled by the separatists and provoked to join militancy and stone pelting or other illegal activities but their own family members and relatives continued to enjoy the privileges abroad.