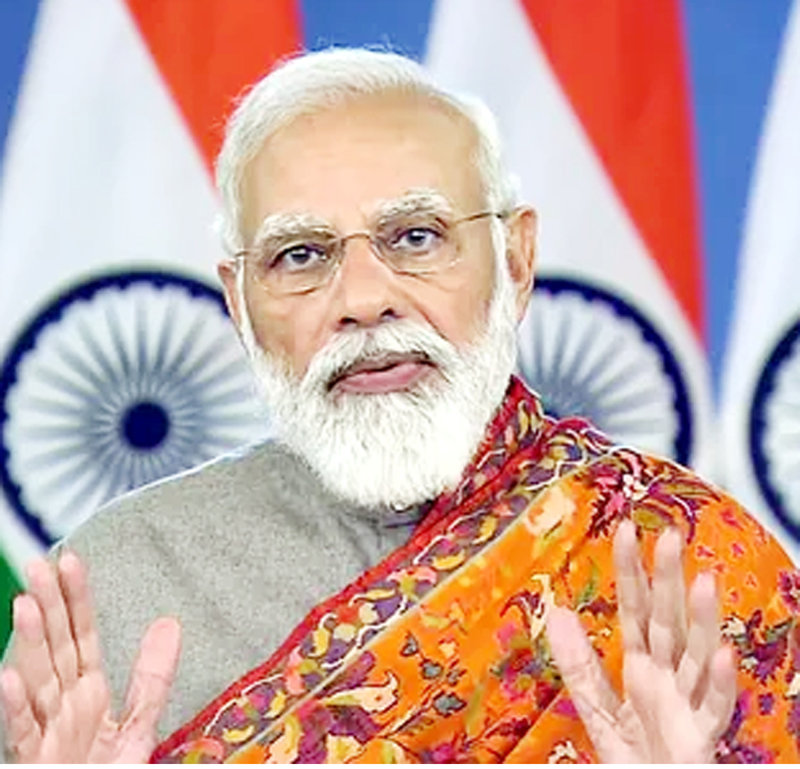 NEW DELHI, Nov 28:
Asserting that this is an era of start-ups, Prime Minister Narendra Modi today said India is leading the world in this field with more than 70 Start-Ups having crossed the valuation of USD 1 billion.
In his monthly Mann Ki Baat radio broadcast, the Prime Minister also said that he wants to be in service of people and not be “in power”.
“I am not in power even today and I don’t want to be in power in future also. I only want to be in service; for me this post, this Prime Ministership, all these things are not at all for power, they are for service,” he said when an Ayushman Bharat beneficiary wished him to remain in power.
Modi said that in the many works of the Government, amidst the many schemes of development, things related to human sensitivities always give a different kind of joy.
“With the efforts of the Government, with the schemes of the government, the way a life changed… What is the experience of that changed life? When we hear this, we too are filled with empathy. It also gives satisfaction to the mind and gives inspiration too to take that scheme to the people,” he said.
Modi spoke with two people who got their treatment done with the help of the Ayushman Bharat scheme, which, they said changed their life for the better.
The Prime Minister also cautioned people that coronavirus has not gone yet and “it is the responsibility of all of us to take precautions”.
In his broadcast, Modi said that in any country having a large population of youth, three things — ideas and innovation, passion to take risks and the ‘can do’ spirit– matter a lot.
When these three things come together, unprecedented results are achieved and miracles happen, he said.
“These days we hear all around us, Start-Up, start-up, Start-Up. It is true that this is the era of start-ups and it is also true that in the field of start-ups, in a way, India is leading the world,” Modi said.
He noted year after year start-ups are getting record investments and this sector is growing at a fast pace.
“Even in small cities of the country, the reach of start-ups has increased. Nowadays the word unicorn is much in discussion. Unicorn is a Start-Up whose valuation is one billion dollars, around Rs 7,000 crore,” Modi said.
“Till the year 2015, there used to be nine or 10 unicorns in the country, you will be very happy to know that now India is flying high in the world of unicorns as well. According to a report, a big change has come this year. In just 10 months, a unicorn is being raised in India every 10 days,” he said.
This is a big thing because the youth of the country achieved this success in the midst of the Covid pandemic, he said.
“Today, there are more than 70 unicorns in India, that is, more than 70 start-ups have crossed the valuation of USD 1 billion,” Modi said.
Due to the success of start-ups, everyone has noticed them and they are getting support from investors from all over the country and abroad, he said, adding that just a few years ago no one could have imagined this happening.
Indian youth are also contributing to the solution of global problems through start-ups, he noted.
Modi also spoke to a youngster, who has tried to put forward a solution to the problem of pollution by introducing technology by which he managed to reduce emissions of buses by 40 per cent.
In his broadcast, the Prime Minister also noted that in the month of December, Navy Day and Armed Forces Flag Day are celebrated, and on December 16, it will be the Golden Jubilee year of the victory in the 1971 War.
“On all these occasions, I remember our armed forces, our soldiers, especially the brave mothers who gave birth to these warriors,” he said.
Modi also recalled that in the pervious edition of Mann Ki Baat, he had referred to three competitions – one on writing patriotic songs; one on drawing rangolis on events connected with patriotic fervour and the freedom movement and one on scripting lullabies that nurture dreams of a grand India – and hoped that people must have sent in their entries.
Asserting that it is not necessary that bravery should be displayed only on the battlefield, Modi narrated how people of Jalaun in Uttar Pradesh revived the Noon river which was on the verge of extinction.
The people of Jalaun took the initiative to change this situation and formed a committee, he noted.
“Thousands of villagers and local people spontaneously volunteered to join this campaign. The panchayats started working together with the villagers, and today in such a short time, and at a very low cost, the river has come back to life again,” Modi said.
“Apart from the battlefield, this example of bravery shows the determination of our countrymen, and it also tells that if we take a resolve, nothing is impossible and that is why I say – ‘Sabka Prayas’…Everyone’s effort,” he added.
In the radio programme, Modi also referred to a viral photo of a boat in Meghalaya, saying “when we look closely at this boat floating in the air, we come to know that it is moving on the river water”.
“The water of the river is so clear that we can see its bed and the boat seems to be floating in the air. There are many States in our country; there are many areas where people have preserved the colours of their natural heritage,” he said.
These people have kept the lifestyle of living in harmony with nature alive even today and this is an inspiration to all of us too, the Prime Minister said. (PTI)