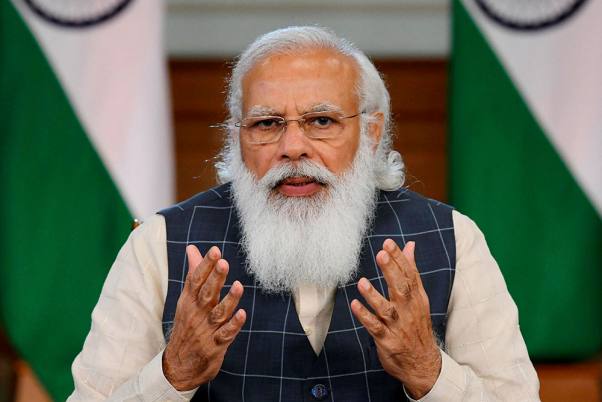 Physically or Virtually to be decided in two days

Sanjeev Pargal
JAMMU, Sept 29: Prime Minister Narendra Modi or Defence Minister Rajnath Singh are expected to unveil a monumental national flag measuring 225 feet x 150 feet at Hall of Fame in Leh town on October 2, physically or virtually, a decision on which is expected to be taken in the next two days. Their visit to Leh or virtual address on the occasion is aimed at sending strong message to China as the Indian Army is engaged with the People’s Liberation Army (PLA) for more than a year along the Line of Actual Control (LAC) in Eastern Ladakh.
Highly placed sources told the Excelsior that the Fire & Fury Corps as the 14th Corps of Army, headquartered at Leh is known, has made all arrangements for unveiling of the tallest ever monumental national flag in Leh.
The Army and administration in the Union Territory of Ladakh are working on three plans. First, the visit of Narendra Modi to Leh on October 2, Second the tour of Defence Minister Rajnath Singh and Third, the virtual unveiling of the monumental flag from New Delhi by either of the two.
“A final decision is likely to be conveyed to the Army and administration by October 1,” sources said, adding that on their part the Army as well as administration are fully geared up for visit of either the Prime Minister or the Defence Minister to Leh or virtual unveiling of the flag at the Hall of Fame in Leh town.
Talks are on in this regard between the Union Territory of Ladakh Administration and Army with both the Prime Minister’s Office (PMO) and the Ministry of Defence (MoD), they said.
Lieutenant Governor of Ladakh Radha Krishna Mathur will be present at the unveiling ceremony, sources said.
They added that if the Prime Minister or the Defence Minister visit Leh, they will be briefed by the top Army Commanders especially the General Officer Commanding (GOC) of Leh-based 14 Corps on the situation prevailing in the Eastern Ladakh. However, if the ceremony is held virtually, the VVIP is expected to address the troops before or after the unveiling ceremony of monumental flag.
Ahead of the VVIP visit or virtual address, Defence Secretary Dr Ajay Kumar is reaching Leh tomorrow, sources said, adding if the Prime Minister or the Defence Minister visit Leh, Army chief Gen MM Naravane might also reach Leh to join the function.
After standoff between Sino-Indian troops at various places along the LAC in Eastern Ladakh, Prime Minister Narendra Modi had visited Leh on July 3, 2020 and interacted with people and troops.
Defence Minister Rajnath Singh had visited Ladakh on a three-day visit from June 27-29 this year during which he had also toured forward posts in Eastern Ladakh for assessment of the situation along Sino-Indian border. He had met top Army Commanders and interacted with troops.
President Ram Nath Kovind was also scheduled to visit Drass to pay tributes at War Memorial in Kargil district of Ladakh on July 26 on the occasion of 22nd year of India’s victory over Pakistan in Kargil war. However, he had to cancel his visit due to bad weather, The President now proposed to visit Drass on the occasion of Dussehra festival.
It may be mentioned here that Sino-Indian troops had disengaged from some points on the Line of Actual Control in Eastern Ladakh but they remained in eyeball-to-eyeball position at many other places.
Explaining the situation along the LAC, sources said that the friction points left need to be resolved, from the ones that developed last year, after the Chinese aggression in April-May timeframe.
Three major friction points had emerged between the two countries including both the banks of Pangong lake, Gogra heights and the Hot Springs area.
Through multiple rounds of talks, both sides have resolved issues involving Pangong Tso and Gogra heights friction points as troops have disengaged from there.
Sources said the Chinese side is also rapidly converting their temporary structures for their troops into permanent ones with all facilities.
Chinese have not moved back any of their troops that had been deployed since April 2020 as the Chinese Army seems to be working on long term deployment of troops near the Indian border.
The Chinese are also trying to ape the Indian forces’ model of deploying the sons of the soil in these mountainous areas to enhance swiftness in operations. India has been equally matching strength of the Chinese troops in Eastern Ladakh.