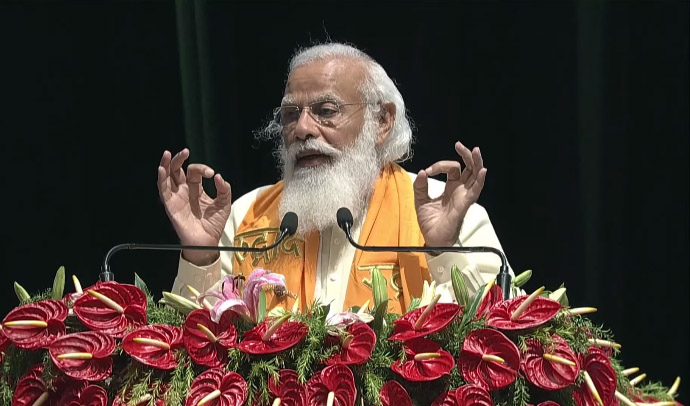 VARANASI (Uttar Pradesh) : In a major decision to empower agriculture infrastructure, Prime Minister Narendra Modi on Thursday announced that a Rs 1 lakh crore special fund has been set up by the Central government to modernise agriculture infrastructure in the country.
“The Centre has recently taken a major decision to empower agriculture infrastructure. The Rs 1 lakh crore special fund set up for the modernise agriculture infrastructure and it will benefit our agriculture mandis too. This is a major step towards making the nation’s mandi system modern,” said PM Modi at the inauguration of various development projects worth over Rs 1500 crores, at the Banaras Hindu University (BHU) in Varanasi.
He said that Ro-Ro vessels facilities launched today will help the tourism sector in Kashi.
“Our boatmen are also being given better facilities. Diesel boats are being converted into CNG. This will bring down their expenses, benefit the environment and attract the tourists,” he added.
He also lauded Uttar Pradesh Chief Minister Yogi Adityanath’s efforts towards building a ‘modern’ Uttar Pradesh.
“He (CM Yogi Adityanath) is quickly moving forward in making a modern UP, there is rule of law in UP today. ‘Mafia raj’ and terrorism have been brought under control. Today, criminals who cast an eye on women know that they won’t be able to hide from the law,” the PM said.
“Today, Yogi ji himself is working hard. People of Kashi can see how he comes here regularly and inspects every development project and quickens the work. He works like this for the entire state, goes to every district,” the PM added.
Taking a jibe at the previous Smajawadi-led government in Uttar Pradesh, PM Modi stated that the Centre had released money for various schemes for the development of Varanasi even before 2017 but the state government came in the way of their implementation.
“It is not as if schemes were not brought for UP before 2017, it is not as if money was not released. We were given the opportunity to serve you in 2014, even at that time, swift efforts were made from Delhi. But at that time, hurdles used to come up in Lucknow,” he added. (Agency)