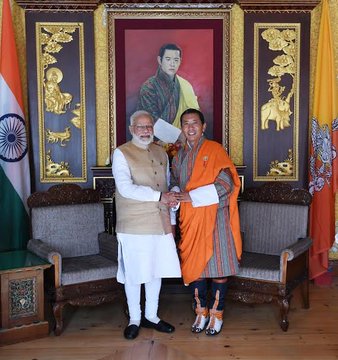 THIMPHU: Prime Minister Narendra Modi and his Bhutanese counterpart Lotay Tshering held wide ranging talks on Saturday during which they discussed steps to further expand the bilateral partnership across several sectors as the two nations signed 10 MoUs to infuse new energy in their ties.

“We had a comprehensive meeting, where we deliberated on the relations between India and Bhutan. There is great scope to further improve economic and cultural ties between our nations,” Prime Minister Modi said.

Modi, who is here on his second visit to Bhutan and the first since his re-election in May this year, inaugurated Mangdechhu hydroelectric power plant and also launched stamps to commemorate five decades of India-Bhutan Hydropower cooperation.

“I am very happy to come to Bhutan at the beginning of my second term,” Modi said in a joint press statement after delegation-level talks with his Bhutanese counterpart at the historic Simtokha Dzong.

The two countries signed 10 Memorandum of Understandings in the field of space research, aviation, IT, power and education. (AGENCIES)

No respite from cold wave in Jammu and Kashmir, Ladakh