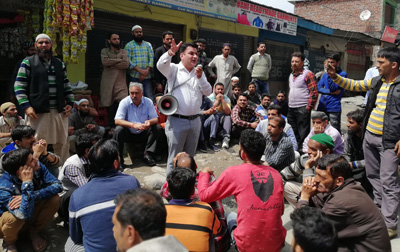 Excelsior Correspondent
RAMBAN, Apr 11: Despite lapse of over two months, the district administration and the concerned construction agency have failed to repair the Ramban-Maitra road, which forced the people hailing from different areas of the district to held protest here today.
A large number of people residing in Maitra and surrounding areas assembled near Masjid Market here and held protest against the construction company Gammon India Limited and the district administration. The protest was led by Ex-MLA Congress Ashok Kumar and District President Congress Ramban Arun Singh.
The protesters alleged that no preventive measures were taken before construction of the flyover from Khow Bagh to Cafeteria Morh, due to which Ramban-Maitra road developed cracks on February 8.
“As cracks got developed on the Maitra road due to construction of the flyover, the people residing in different areas of the district are facing manifold problems to get their work done”, said Ex-MLA Congress Ashok Kumar and District President Congress Ramban Arun Singh while addressing the protestors.
They further informed that the total distance from Ramban to Maitra is around 2 kilometers, but now due to cracks on the road, a person have to take route via Karol to reach Maitra, which is around 12 kilometers.
“No cracks have been developed on the Maitra road, if the construction company Gammon India Limited and the district administration had taken preventive measures”, they stated.
After getting information, officials of the District Administration including Tehsildar rushed to the spot and assured the protestors to redress their grievance related to restoration of vehicular movement on Ramban-Maitra road in the shortest possible time.
On getting assurance, the protesters dispersed.
Giving threat to intensify the protest if the road is not repaired in the next 10 days, the protesters dispersed.
Meanwhile, Tehsildar Ramban has directed SHO Police Station Ramban to lodged FIR against General Manager Gammon India Limited Sat Paul, Deputy General Manager Gammon India Limited Ashwani Verma and Site Incharge Parmod Mishra for harassing the people by inordinate delay, gross negligence and inaction on the part of the Gammon Engineers for not making the damaged public road Ramban-Maitra motorable as assured by the Deputy General Manager Gammon India Limited on March 26 this year.