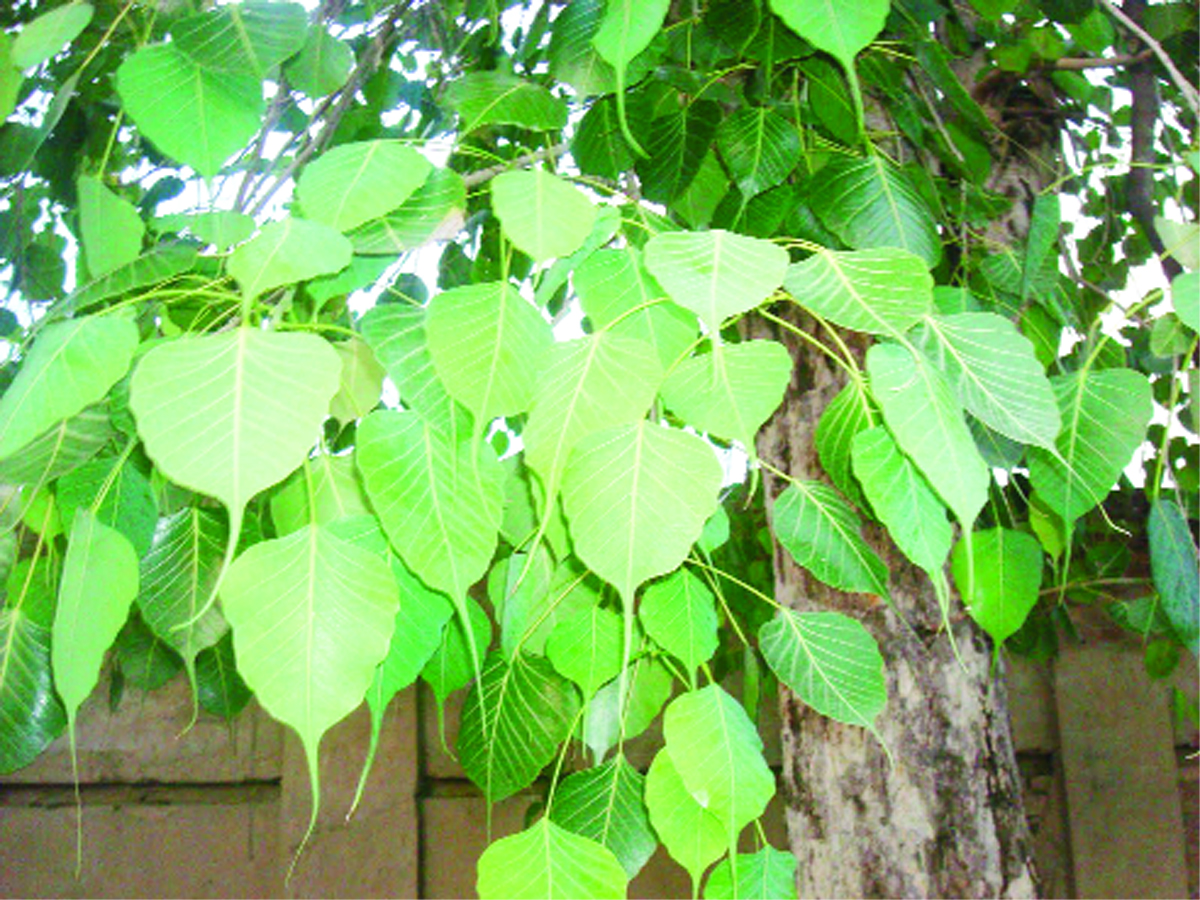 Arun Kumar Gupta
“He that plants peepal trees loves others beside himself.”
According to Hindu Mythology, since the existence of this universe, the peepal tree is worshipped because of its extensive medicinal value. Apart from its religious significance, this sacred tree, native to Indian subcontinent is used to treat multitudinous ailments and diseases varying from simple injuries to chronic ones. Peepal tree leaves contain glucose, asteroid and mennos, phenolic while its bark is rich in Vitamin K, tainen and Phaetosteroline. All these various constituents make the Peepal tree an exceptional curative tree.
In Vedas, it has been alluded to that the leaves, bark, shoot, seeds and its fruit has multifarious remedial benefits which are being put to use since ancient times to heal many diseases such as Stomach Pain, Asthma, Snakebites, Skin disease, Eczema itching, Cracked heels, Gastric problems, Blood disorders, Liver diseases, Eye pain, Tooth disease etc. This tree is extremely advantageous for good oral health as even by chewing on the twigs of the tree can help remove any bacteria which is, if present, in the mouth gets removed, thus preventing disease or infection of any kind. Besides, it also helps to remove stains from teeth and make them clean. If a person is prone to recurrent nose bleeds, the peepal tree can help him as a few drops of peepal leaves juice when applied to the nostrils can provide relief.
Apart from its medicinal values, the peepal tree is also connected with religious sentiments of Hindus as the Sadhus find divine connection under it. Gautam Buddha attained enlightenment while meditating under it. Lord Vishnu is said to manifest himself in it and the tongs of bells in Buddha temple in Myanmar are shaped like peepal leaves. Dating back to Pre-historic times, it is rightly called “The Tree of Wisdom”. Peepal trees’ roots represent Brahma, its bark represents Vishnu and its branches represent Shiv Mahadeva. According to Vishnu Purana, as the wide spreading Peepal tree is contained in a small seed, so is the whole universe contained in Brahman.
Blessed with long life, the Peepal tree is revered across the world and it is advised to plant it in the East of the house or a temple. To cut a peepal tree is looked upon as a sin. The perfect heart shaped leaves with tampering tips of this tree are the real showstoppers.
In southern parts of India, these leaves are used for miniature paintings, mostly showing religious figures and scenes, animals, scenery and modern art also. The leaves are also used as Camel and Elephant fodder while the peepal bark produces a dark red dye and is used to manufacture Tannin to treat leather. Though Saturdays are earmarked to worship this tree where Lord Shani and Goddess Laxmi reside but one can pick any day to plant one and save one.
There are innumerable social, religious organizations and NGOs who have taken various initiatives regarding plantation drives but a unique initiative has been under undertaken by a social worker, Pritam Singh, proprietor of Anapurna Caterers and Decorators, Jammu who has planned to plant 5000 peepal saplings in and around Jammu and Kashmir areas for the first time in state. As a gesture of goodwill, he has so far planted more than 1000 peepal saplings and plans to accomplish his goal in the near future free of cost. The objective of planting peepal saplings is to create environment free from pollution as it is known that a fully grown peepal tree emits oxygen throughout day and night while absorbing carbon dioxide which is harmful for all living beings. Once the plantation drive of peepal sapling is completed in our state, he plans to take it to other states and union territories also for their betterment as well.
In order to accomplish the mission of our Prime Minister Narendra Modi who laid emphasis on the importance of tress in our environment and the role it will play in changing India to make the environment clean, green and pollution free.