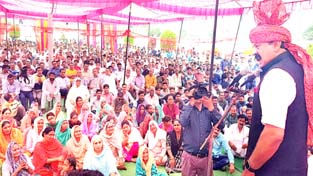 Excelsior Correspondent
SAMBA, Apr 8: National Conference Senior Vice President and former Minister, Surjeet Singh Slathia said that PDP-BJP has nothing to showcase as its achievements during the past over three years of misrule except failures on all fronts and broken promises.
“Apart from developmental and administrative inertia, the present anti-people dispensation is credited of sowing seeds of discord and perpetrating polarization by bringing regions and communities eyeball to eyeball situation as per sinister political strategy”, Slathia said while addressing a public meeting at Village Barjani Keen Panchayat Meen Sarkar Bari Brahmana
The former Minister blamed the coalition of credibility deficit, saying “There is a huge contradiction between words and actions of the coalition partners. Referring to the deceptive posturing of the alliance partners, he said this is being done with a purpose to conceal its failures on governance and developmental fronts.
He also described lack of coordination between various components of the Government detrimental to the interests of the sensitive state, which needs special dispensation for its unique problems. He said the initiatives taken by the previous Government led by Omar Abdullah with regard to implementation of various developmental projects and welfare schemes have been put under the carpet mostly, which has considerably retarded growth and development across the state.
Slathia listed various issues being faced by the people of the Vijaypur constituency including erratic power supply, scarcity of drinking water, deteriorating living standard of border dwellers, defunct utility services, increase in prices and deficiency of ration stocks have terribly hit the common man, who is feeling sense of deprivation.
The former Minister said people, especially unemployed youth and different segments of employees and daily rated workers are taking to streets and this Government doesn’t seem to be concerned. He cautioned the Government against testing the patience of the people and hoped that their problems would be looked into for early redressal.
Interacting with the people, State Vice President Rattan Lal Gupta castigated the PDP-BJP Government for contemptuously ignoring peoples’ aspirations and taking vicarious pleasure in their accumulating woes.
Prominent among those present on the occasion included National Conference leaders Dharamveer Singh Jamwal, Pradeep Bali, Vijay Lochan, Abdul Gani Teli, Naar Singh Labour Union President, District President Mohinder Gupta, Distt Vice President Vijay Singh, Block President  Bhagwan Singh etc.